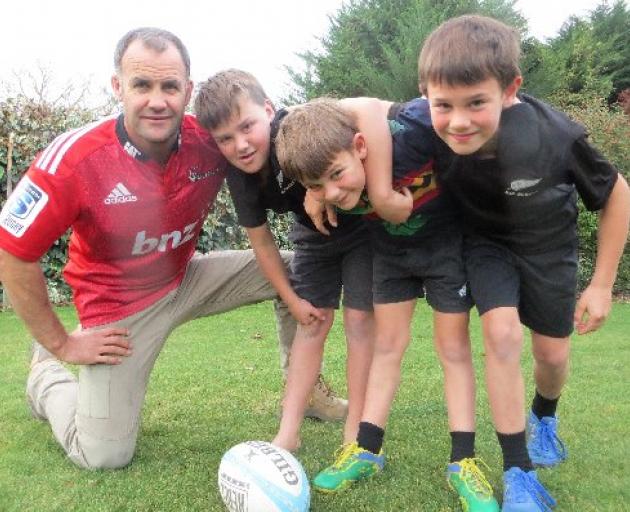 The Canterbury trio have been playing club age-group rugby for Collegiate in Ashburton and are champing at the bit to get on the field again.

Jesse, 10, who wouldn’t mind being Beauden Barrett when he is older, has been playing rugby since he was five, starting with rippa rugby and progressing through to tackle rugby.

He is a forward and will play under-11-and-a-half this year.

Louie, 8, is able to name at least half of the latest All Black XV and was due to start his second year of tackle in the under-9s and Flynn, 7, the most ninja-like of the three, will play his final year of rippa rugby in under-7s.

The Ross boys come from a long line of rugby players. Their grandfather Jock was an All Black and dad Cam played provincial rugby and is involved in grassroots rugby as assistant coach to eldest son Jesse’s team.

Cam said although he and the boys really enjoyed their rugby, the past few weeks had been surprisingly good for the family, who along with mother Melissa and sister Marlie, 12, got to spend more time together.

At this time in any other year, with the boys playing rugby and Marlie netball, the family would be heading in four different ways on a Saturday.

“It’s been good without the pressure of being a certain place at a certain time.”

He said while there was no rugby to play they were doing other things as a family, such as biking along the bike trail.

However, when grassroots rugby finally gets the go-ahead the boys will be ready. Rugby and other community sport are preparing to return in stages.