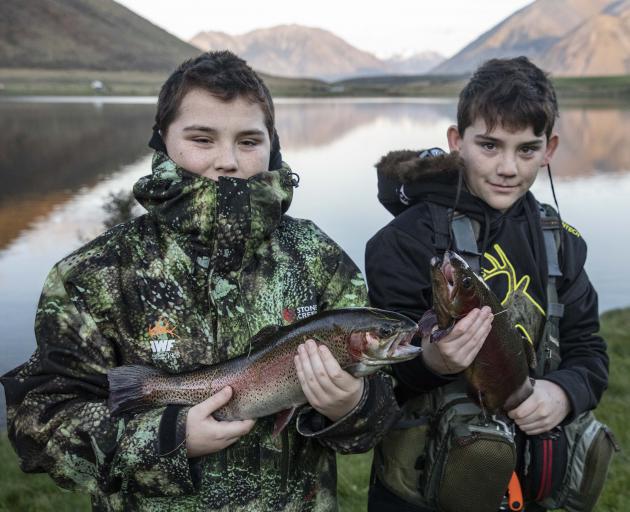 Twins Lleyton and Joshua Rogers with their catch.
Anglers flocked to the Canterbury back country in their hundreds as fine weather heralded the opening day of the high country fishing season.

Conditions on the lakes were beautiful with warm fine weather providing the perfect opportunity for families to spend the day fishing.

Such is the prestige held by anglers for the Canterbury high country as a fishing destination that anglers came from as far away as Southland and Auckland.

Some northern hemisphere anglers also timed their trip to New Zealand to coincide with opening weekend.

Over a hundred boats were on Lake Coleridge but shore-based anglers were out in force and both were reeling in the fish.

Fish & Game delays the opening of the high country areas to fishing for a month so that late spawning rainbow trout have the opportunity to spawn without being disturbed.

On Saturday afternoon, hundreds converged on Ryton Bay for the prize giving of the annual Lake Coleridge Fishing Competition.

There was 265 entrants competing for thousands of dollars of prizes donated by Hunting & Fishing Tower Junction.

Fish & Game uses the data gathered from the fish caught to assess the health of the fish population in the lakes.

Fish weighed in for the competition looked healthy and some fish were destined straight for the barbecue after they were measured.

Fish & Game Rangers were out in force checking that anglers were licensed and following the rules.

Apart from a couple of anglers that had left their licence at home, no issues were detected.

The Canterbury high country lakes are so close to Christchurch and easily accessible by car that they are a perfect spot for a day trip.