A graduation photograph taken nearly 50 years ago has sparked some happy memories for one Cantabrian.

A young Max Alexander was snapped in his graduation gown on May 6, 1975, having completed a Bachelor of Science at the University of Canterbury. The image is among thousands being held by the Canterbury Museum after Christchurch photographers Standish and Preece donated their negatives in 1992. Museum staff have recently put the photos online to try to find out more about the people in them. The images have captured 125 years of social history, including many Ashburton subjects.

Max said he did not have a copy of the graduation day image and was amused to see it. He did another year of study post-grad and became a secondary school teacher. 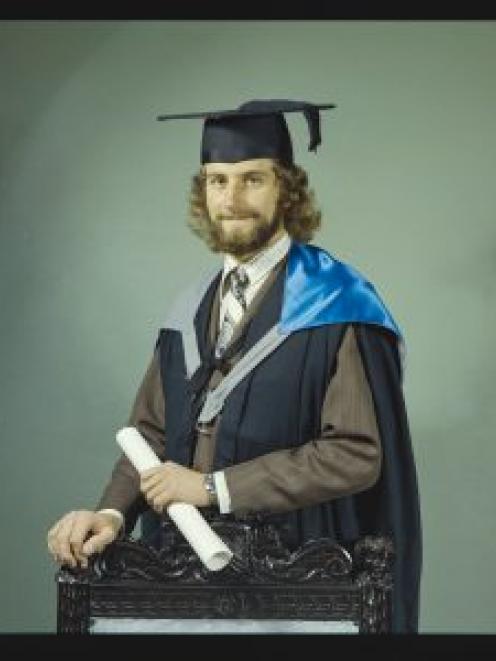 Max Alexander in his graduation regalia for a photograph taken by Standish and Preece in 1975. Photo Canterbury Museum 2019.0.725
He grew up in Mt Somers and went to primary school there until 1966. He enrolled at Ashburton College the next year, spending three hours a day on the Greenstreet bus run.

He moved to Ashburton with his widowed mother later in 1967 and became a townie.

Teenage years were memorable and enjoyable, with swimming at the Borough School pool and Hampstead pool and rugby, cricket and tennis. He later took up hunting and tramping.

Max, and school friends, had after-school and holiday jobs in shops, offices, dairies, service stations and delivering milk and newspaper.

“Barbers were another source of employment after school, late nights on Friday nights, and school holidays. I worked for Noel Whiting in the Triangle in his barber and tobacconist shop, sweeping the floor and serving in the shop.”

He was also an offsider on stock trucks but once he had a driver’s licence, Max worked for a grocery store in Tinwald delivering goods in a Commer van and picking up stock.

At university, he spent his holidays carting hay for contractors such as Trevor Scott, who operated on payment per bale.

“The first season I was paid at one cent per bale, but after achieving my truck licence and being put in charge of the truck, that rose to 1.5 cents per bale for all that responsibility. As part of a team of four, one thousand bales in a day was the target, sometimes met, sometimes exceeded, but when the gear broke down, sometimes we were woefully short. And wet days were stay at home, no pay days. We all usually managed to accumulate $1000 or so over the holiday period, depending on outgoings during that time.”

Max said he was lucky to make great friends through those school days, many of whom remained as valued friends today.

“There’s a genuineness about Mid Canterbury people that seems to endure throughout life.

“Perhaps it’s because when you meet them, you immediately have your roots in common, but I also think it goes beyond that and comes from the wonderful fabric of Mid Canterbury society and its values.”

Max taught in Greymouth for three years and then returned to Ashburton, where he worked alongside the late Bill Upton and his cousin, the late Jim Alexander in Upton’s Motor Accessories in Tancred Street. He bought the business off Bill in 1979.

He owned it until the end of 1994, when he sold it and moved to Nelson.

Max said he worked alongside some great staff and enjoyed valued loyalty from town and rural customers. He was an active member of the Ashburton Jaycee Chapter.

“That group of younger business people and others made a significant contribution to the town through a variety of community projects and leadership training, and many of them continue to do so through their community service and business leadership skills.”

Max has lived in Christchurch for the past 22 years and though retired, he still does some business advisory work.

He said he kept an interest in all things Mid Canterbury and social media had made it easier to keep in touch with old contacts.