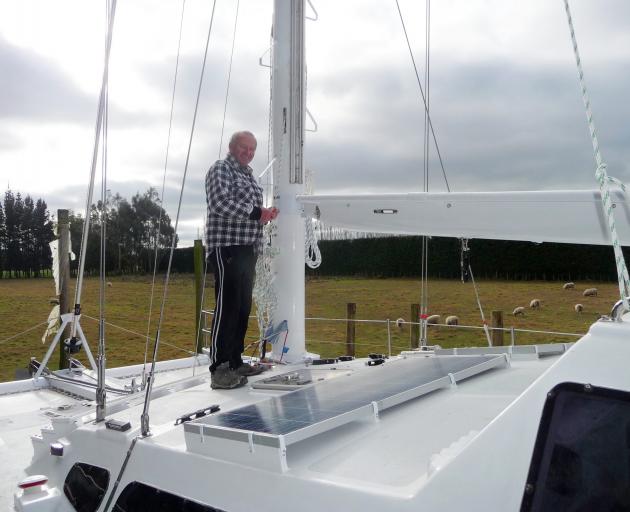 The impressive craft has been named Mackatac. The catamaran project was a pipe dream hatched more than 30 years ago, but was expected to take five years to complete rather than two decades.

It has been built from scratch in McIntosh's workshop, which has grown to accommodate it.

First one hull was crafted meticulously from strip planking and then fibre-glassed.

A second hull followed. The two hulls eventually came together as one.

The same Western Red cedar planking was used for the boom, forebeam and 15m mast.

The mast and forebeam were also carbon fibred. 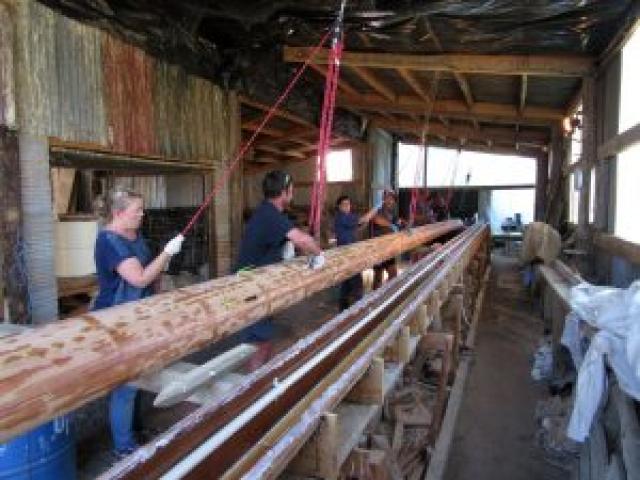 Mitch McIntosh needed more hands on deck when putting the two halves of the 15m mast together in his workshop. Photo: Ashburton Courier
McIntosh designed the boom so that it can collect water and the mast alone took months to build.

“I’ve always wanted to build a boat, it’s just taken quite a bit longer than I envisioned," he said.

“I’ve fitted the project in around different work commitments over the years and I’ve bought materials and parts as I could afford them.”

McIntosh said good progress had been made over the last five years and he was proud of what he had achieved.

He had gone into the project with good woodworking skills, but along the building journey had learnt many others skills, including fibre-glassing and welding.

The internet had come in handy at times, he said.

McIntosh, who is 71, was born and raised in Hinds and has a farming background.

He worked in Western Australia for a number of years and is currently a milk tanker driver.

After he has completed the current milk season he intends sailing off into the sunset.

His retirement plans include living on the boat full time and sailing it. First, however, he needs to learn to sail it. 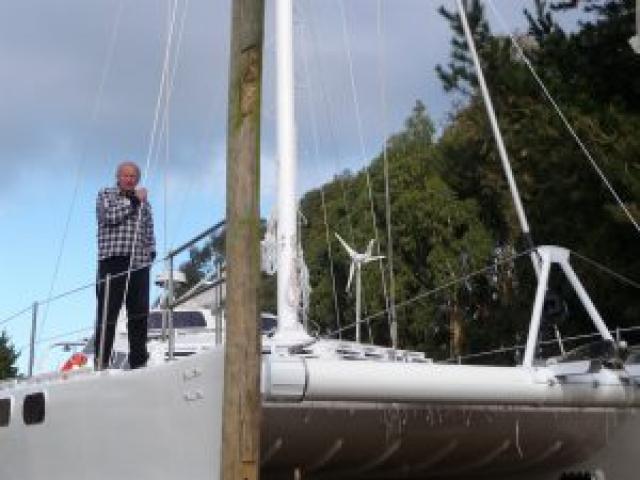 The impressive craft has been named Mackatac. Photo: Ashburton Courier
He has no nautical background or sailing skills, but is unfazed and can’t wait to start learning.

“I reckon it will take me two to three months to learn, with plenty of practical involved.

“I’ll have to sit the coast guard’s maritime course as well.”

The sails for the catamaran are not expected for another three months, but the craft’s two engines will allow McIntosh to cruise at between six and 10 knots.

The seven tonne catamaran is spacious and totally self-contained and will be a home from home for its builder.

It has a galley, two toilets, shower, sleeping for eight and a high tech wheel house.

It features two large and six smaller solar panels, wind generator and a mast camera to see the front of the big boat.

Electrical and gas surveys have been signed off and another will follow for insurance purposes.

There are still a few small jobs to complete before the catamaran is shifted from the paddock and taken to its temporary mooring in Timaru.

Sign writing on the side of the boat with feature the boat’s name, a Scotsman in a kilt waving a sword, and a fern.