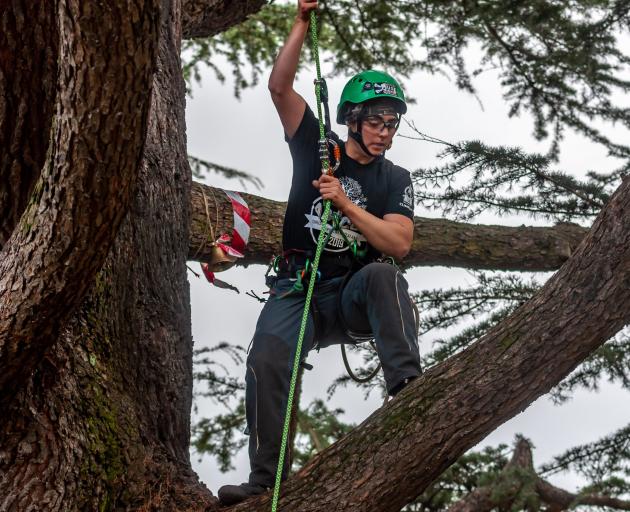 It is the the first time the long-running competition has been held in the town and the public is welcome to watch competitors perform in the tree-tops.

Five trees have been selected for the competition and another will be used for kids climbing.

The action will take place in a compact area of the domain near the West Street car park and sculpture area on September 12 and 13.

South Island event co-ordinator Ben Fentiman said three regional finals were being on the North Island and just one on the South Island.

Ashburton had been chosen this year because of its central location and for the quality of trees in the domain.

Ashburton Domain is well-known in arborist circles and it features some magnificent trees.

Cedars, oaks and elm have been chosen for the competition, which contained five elements that helped simulate the work of arborists.

Most of the competitors were arborists, but there were a couple who just liked to climb.

Mr Fentiman, a lecturer in natural resources and arboriculture at Otago Polytechnic, said the competition included an aerial rescue of a dummy, that would see competitors talk through the rescue process, a timed and scored climb where climbers rang the bell at various stations, and a belay speed climb.

There was also a timed ascent up 15m of ropes and a challenge where climbers would throw lines at targets.

‘‘It’s exciting stuff to watch and spectators are very welcome to check out the action.’’

Mr Fentiman said there would be strict health and safety protocol in place.

Each event would be taped off and only climbers and judges were allowed in the area.
As well as a health and safety plan, there would be strict scrutiny of climbers’ equipment and a risk assessment carried out on the trees being used.

He said organisers had received good support from the Ashburton District Council.

The competition runs on September 12 from 9am until around 4pm. The following day, the top placing tree climbers will be tested in the Masters Challenge, which will decide the final winners.

The competition is supported by the New Zealand Arboricultural Association and sponsored by Husqvarna.