Several hundred people marched along East Street on Saturday, protesting at the next wave of proposed gun laws.
Mid Canterbury hunters are standing alongside farmers and sport shooters to oppose a second wave of gun law changes.

Government prohibited military-style semi-automatic weapons in the wake of the mosque shooting in Christchurch last year and now a second tranche of reforms has been before a select committee. 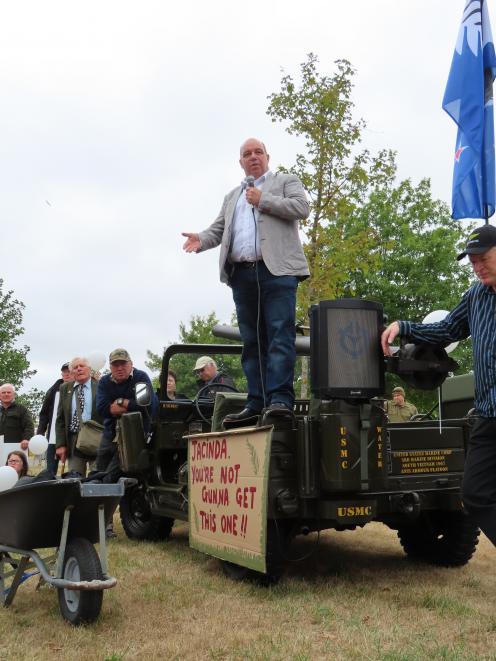 National’s police spokesman Brett Hudson addresses the rally.
Organisers of a gun-owners rally in Ashburton at the weekend believe many law-abiding Kiwis with gun licences do not realise how they will be impacted by the continuing reforms.

The changes will introduce an arms register, reduce the licence period from 10 years to five and impose onerous requirements on gun clubs and shooting ranges that could force some to close.

Mid Canterbury firearms licence holders want to keep the firearms they use to go deerstalking, deal with pests or shoot competitively at a range.

Several hundred people joined the weekend’s rally: Accompanied by military tank and jeep, they walked along East Street and West Street with placards protesting the reach of the reforms.

"Not everybody gets firearms, but we get firearms," said organiser and hunter Stewart Hydes.

"We are regular grassroots law-abiding guys and protesting against the unfairness, the unreasonableness of firearms law reforms. We are innocent but made to feel guilty."

Mr Hydes said the reforms would not make New Zealand a safer place and targeted the wrong people.

He said police were to blame for issuing the alleged mosque gunman a firearms licence in the first place.

"Our police failed to properly vet someone."

Mr Hydes said the select committee had reported back to Parliament that 90 per cent of the submitters on the second tranche of reforms opposed the proposed changes.

National’s police spokesman Brett Hudson met the protesters after the march and said National would vote against the second tranche. "A more sensible regime is needed, with exemptions for firearms, pest control and sport shooting"

He said Government should be more concerned about the rise of gangs and their use of semi-automatics and pistols. "This bill does absolutely nothing about that. It puts the cost and responsibility on law-abiding firearms owners but will do nothing about the criminals."