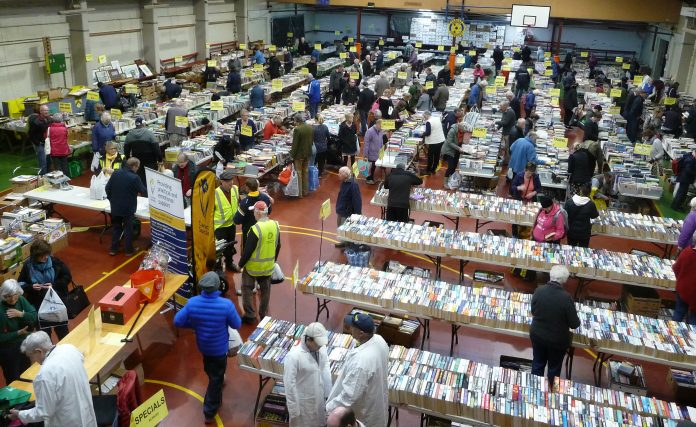 Popular Bookarama is back in September. Photo: Ashburton Courier
Start sorting your books and puzzles because it’s full steam ahead for this year’s Bookarama event.

The long-running Rotary Club of Ashburton fundraiser will open, as usual, on South Canterbury Anniversary Day, September 28 and will run over five and a half days.

The mega book sale has raised well over $1 million for community causes over its 40-year history.

Rotary Club president Don McLeod said the club had decided to give Bookarama the green light despite the recent announcement that opening day community event, Boulevard Day, was not happening this year.

Mr McLeod said Bookarama was established well enough now for it to continue on its own.

There may be fewer people in town on the first day, but that day would attract the many dedicated book dealers who always came along.

“We’ve already had a number of inquiries about Bookarama, so interest is definitely brewing.”

Mr McLeod said proceeds may be down this year from the typical $50,000 to $60,000 usually made, but the book sale was still a lucrative fundraiser for the club and would still generate money that would be given back to community causes.

Boxes for donations of books, jigsaws, puzzles and CDs will be put out at various locations around the district from the end of July. Rotary volunteers will sort items and move them to the Tancred Street sports hall ahead of the sale.