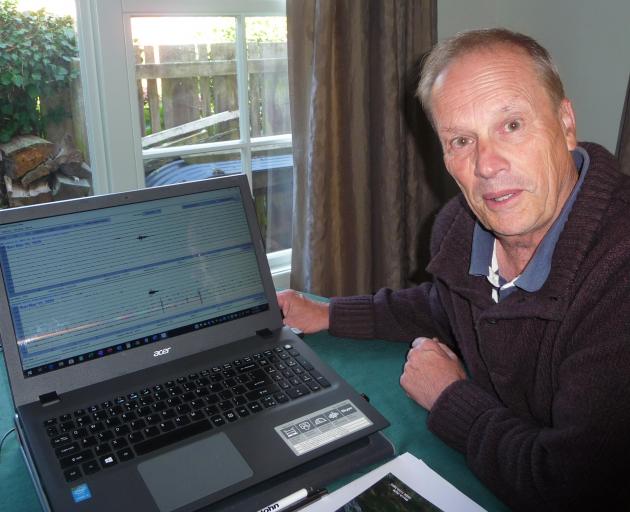 Passionate about geology: Glenn Vallender logs on to access up to the minute seismology data from the seismograph held at Ashburton Museum.
Glenn Vallender taught science and biology to teenagers at Ashburton College for 38 years, but for the last five years he’s been sharing his knowledge and passion for the subject of geology with a much older crowd.

He is a member of the Ashburton University of Third Age (U3A) group and regularly hosts talks for members.

U3A is a learning community organised by and for the people in retirement or semi retirement.

Mr Vallender has been educating seniors locally on all aspects of geology through a special interest group he set up in 2015.

His knowledge has also been shared with Geraldine and Ellesmere U3A groups and he will soon speak to members of a new Temuka U3A group.

Mr Vallender said U3A was set up to ‘‘expand the horizons’’ of older people.

His subject of geology was about "digging deep beneath your feet" and often appealed to people who enjoyed the outdoors or "had a curiosity about the natural world".

His series concludes with a field trip that could take in a visit to a riverbed, the beach or a favourite spot like Mt Somers.

"I present the material, but there is a ‘show and tell’ element to things as well," said Mr Vallender.

Seismology has been one area of growing interest for people in recent years.

Mr Vallender, who has a doctorate in geo science education, is able to show people the seismograph that belongs to Auckland University and kept at Ashburton Museum.

He can access data from it remotely and then drill down to demonstrate what is happening around the country.

He likes to put a local angle on his material whenever possible and is keen to see new members join Ashburton U3A and his interest group.

A new geology series starting on April 22 will focus on urban geology.

Other talks will be held in June, September and November and a field trip to either Onawe peninsula, Kaitorete Spit or the Geosciences Department at University of Canterbury will run in December.

For more information on the geology special interest group contact Glenn Vallender on 308 8373.