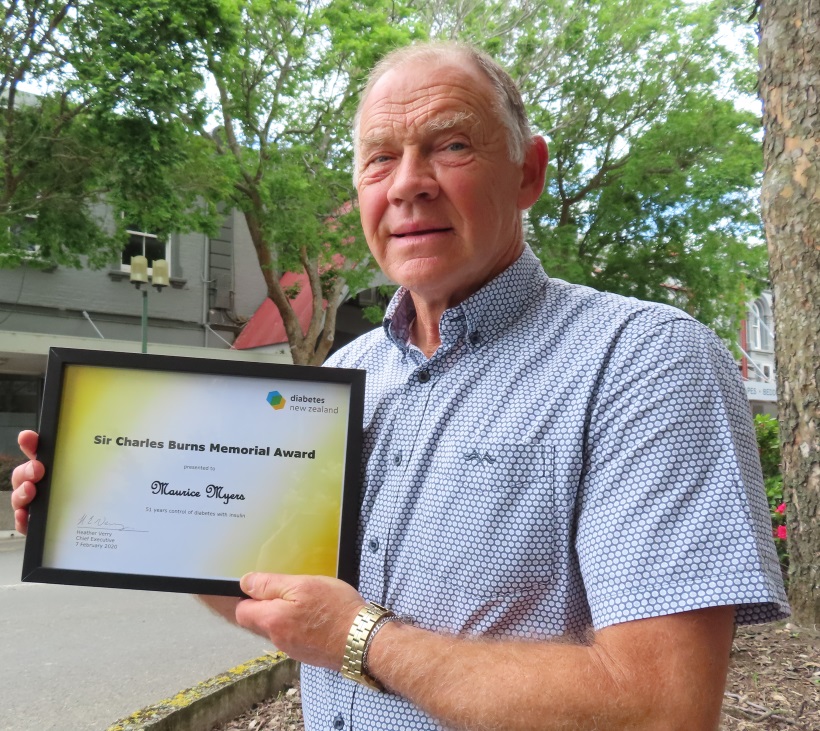 Maurice Myers has been managing his type 1 diabetes for more than 50 years. Photo: Ashburton Courier
Ashburton’s Maurice Myers has made a 50-year habit of sticking to strict meal times and exercising.

As a type 1 diabetic, his life depends on it.

The retired accountant developed diabetes at the age of 15 following a viral infection that stopped his pancreas from producing insulin, that regulates blood sugar. His mother, a nurse, taught him how to inject insulin daily and watch his health; his glucose levels were monitored with a urine test.

Sticking to a routine was not always easy in those early years for the competitive swimmer and basketballer, especially as a young man at university when fast food and beer were temptations.

These days Maurice uses the latest technology to monitor and manage his diabetes. He still sticks to regular meal times, exercises and injects insulin four times a day.

A patch on his arm continuously monitors glucose levels in his blood and an electronic reader or phone app means he can easily keep an eye on fluctuations up or down; levels should be between 4-8.

He pays $2500 a year for the technology but says it should be available to all diabetics in New Zealand and funded by the Government.

Diabetics who manage their conditions well are less likely to develop health complications like kidney failure or heart disease and need more medical treatment. There is no cure.

Maurice is sharing his journey with diabetes because November is diabetes awareness month and this Saturday, November 14, is World Diabetes Day.

He is among 22,000 diabetics in Canterbury and in the 10 per cent with type 1 diabetes. Type 2 can sometimes be improved when people with high glucose levels get their weight under control and take up exercise to bring levels down.

Everyone needs some glucose in their blood, but if it’s too high it can damage bodies over time.

Maurice belongs to the Christchurch diabetes group, which includes Ashburton district people, and members are raising awareness this month of how healthy food choices, including starting the day with a healthy breakfast, exercise and regular testing of blood glucose can make a big difference in the fight against diabetes.

Maurice’s healthy routines over 50 years were rewarded earlier this year when Diabetes New Zealand presented him with the Sir Charles Burns Memorial Award. It is a milestone he thought he would not reach but now he is a role model for others and proof that managing diabetes well can lead to a long life.

He is a master planner – whether he is going to work, for a bike ride or travelling overseas. He packs insulin, sugar gels and barley sugars; he makes sure he eats regular, healthy meals.

He credits wife Isabel for helping keep him on the straight and narrow.

Maurice says new technology, like his glucose monitoring patch, should be easily available to all diabetics to better manage their health and he supports the Christchurch Diabetes group’s efforts to petition for government funding.