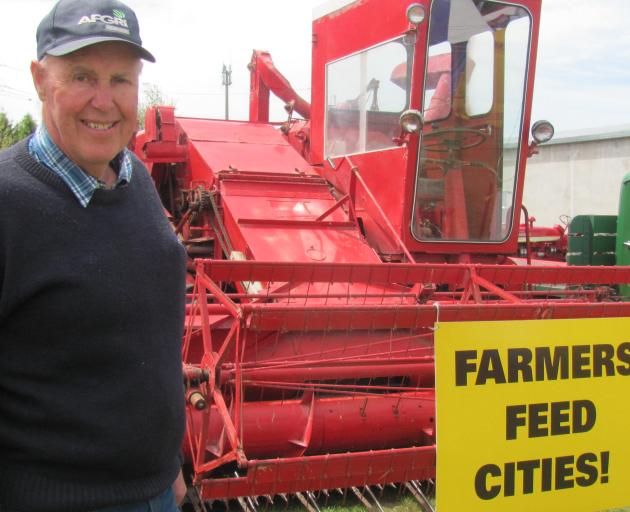 It's served him well cutting white clover on the farm, but is now mostly used for fun.

And it still runs "really well''.

It made an appearance, with a message, at the Mid Canterbury Vintage Machinery Club, on site at the Ashburton A&P Show last weekend, and featured in the Grand Parade.

The message 'Farmers feed cities' was a gentle reminder to people in the community about the contribution farmers give to their lives.

It was a message, Mr Hall saw at a ploughing championships in Ontario, Canada, where farmers are valued for their contribution.

It tickled his fancy, and he brought the message home.

This weekend he thought it was timely to use it.

"We're proud farmers, but we don't like what's happening (farmers feeling under siege and misrepresented). I think it's a true statement,'' he said.

The combine, initially owned from brand new by the Maw family of Barrhill, is powered by a Perkins motor. It has a 10 foot cut.

In keeping with the theme of the show 'Seeds of Mid Canterbury', the combine sat along side 54 other tractors, owned by club members, which were set up with a plough, discs, drills, a truck for carting, and a tractor and baler. The combine's final outing will be to the club's Wheat and Wheels Rally, at the property of Anthony Hampton, in early April, 2022.