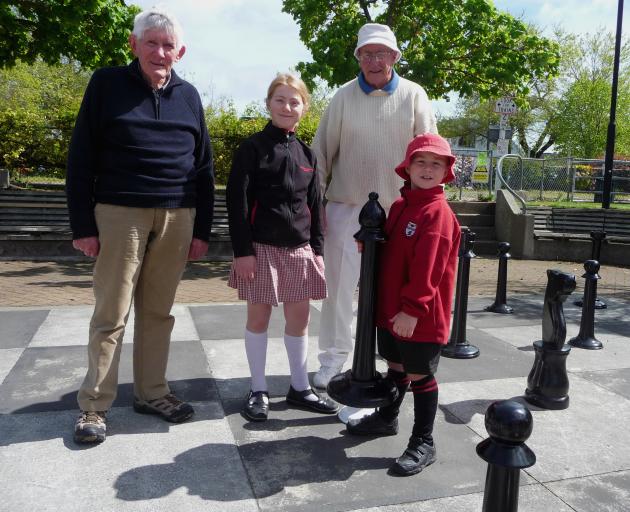 Moves have already been made to revamp and repaint the board's original chess pieces, a job completed by Ashburton Menz Shed handyman Jim Armstrong and others a number of months ago, but the chess squares themselves and surrounding chess imprints are faded and difficult to see. 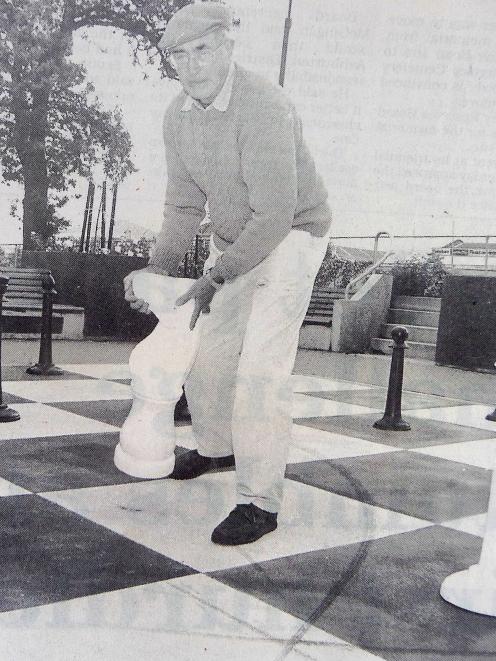 Mr Keeling was president of the flourishing Ashburton Chess Club at the time and and his knight was the first piece to move.

He is now among those leading the call for a spruce-up of the playing area to promote the game and to better use the community space.

Mr Keeling's scrapbook of chess memories show him moving that first giant chess move and other news cuttings and photographs show the support of Ashburton Lions Club, which funded the initial purchase of the $5000 custom made chess pieces, and then later drummed up sponsor support to share the cost.

Mr Keeling, who worked for Ashburton council at the time, said the idea for the public chess area had come from then chief engineer Steve Taylor, a fellow chess club member.

The council had been supportive of the initiative and the squares had been painted.

He said chess pieces were stored away nearby and brought out on request for chess club members and passing visitors.

"We thought the giant chess board was a good idea to help promote the game locally.

"And I support the effort of those who are now seeking to achieve the same thing, nearly 25 years later.

"It would be great for an old fellow like me to see some young people out there playing and enjoying the game.''

Mr Keeling is supported by fellow veteran player Stewart Bennett, who had been playing the game for 65 years.

At the other end of the age scale, siblings Maddie and Harry Page, 12 and eight respectively, have already enjoyed chess games on the East Street board on a number of occasions, but are keen to see the area revamped and repainted.

"Chess is fun to play and playing with the giant pieces on a big board helps you see and understand things from a different perspective,'' said Maddie.

With a revitilisation of the Ashburton CBD on the cards, it is unclear what the future holds for the East Street chessboard.