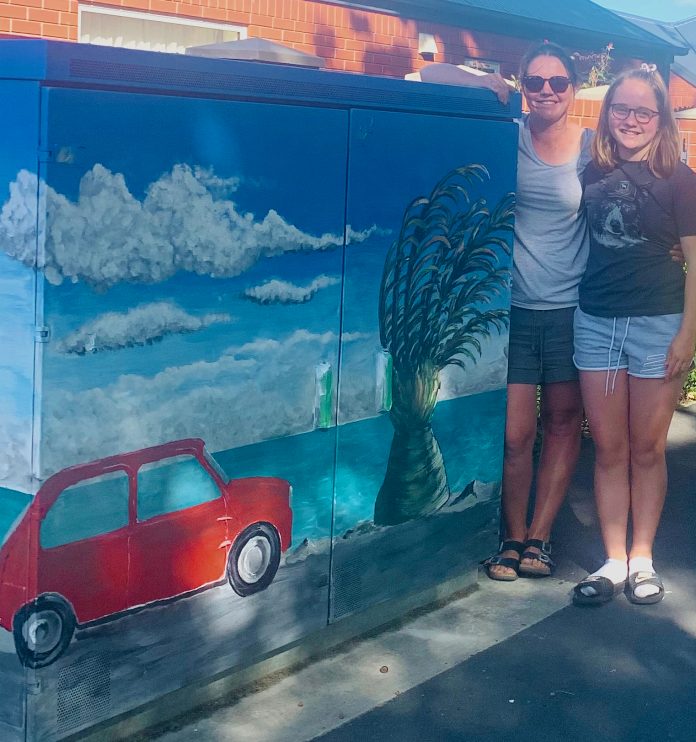 Anna Jemmett and daughter Freya with the red mini artwork. Photo: Supplied
Anna Jemmett has rekindled memories of her early driving days and painted a red mini on to a Chorus communications cabinet on Walnut Avenue, near Rosebank Resthome.

She is one of five artists who have brightened up the otherwise drab cabinets with art in recent weeks.

Anna’s artwork is aptly titled Mini Me and depicts the copper red mini she learned to drive in more than 25 years ago.

16-year-old and handed down to me by my brother. Two aunties had it before that.

“I have great memories as a teenager driving around town with other mates who also had Minis,

Because of its copper red colour, friends, referred to it as “Dr Poo”, said Anna.

The mini had a few mechanical issues and was later sold and replaced with her brother’s Ford Laser.

“I know the Mini is still road registered and it must have clocked up a few kilometres by now.”

Anna, a mother of two, painted the mural with her 13-year-old daughter Freya last month and over a five day period.

She attends weekly painting classes with local tutor Jenny Thompson at Short Street Studio and works with acrylics and pastels.

Another Chorus cabinet on Bathhurst Street has been painted by Ashburton woman Cherie Livingstone and is titled Rainbow Cogs and Gears.

It is centred around the idea of a working machine and symbolic of how we are all part of making the community work as a whole.

A third artwork by former Ashburton College student Jonny Waters is called A tribute to Hine Paaka and found on a cabinet on Allens Road.

Hine Paaka was a sacred matai tree that once stood tall and proud near Alford Forest and provided shelter, food and served as a major landmark for travellers in pre-colonial times.

Two other cabinets at JB Cullen Drive and Middle Road feature depictions of native birds and lawn bowls and have been completed respectively by Nick Lowry and Anne McDonald, both from Christchurch.

Another cabinet will be completed on East Street in the coming weeks.