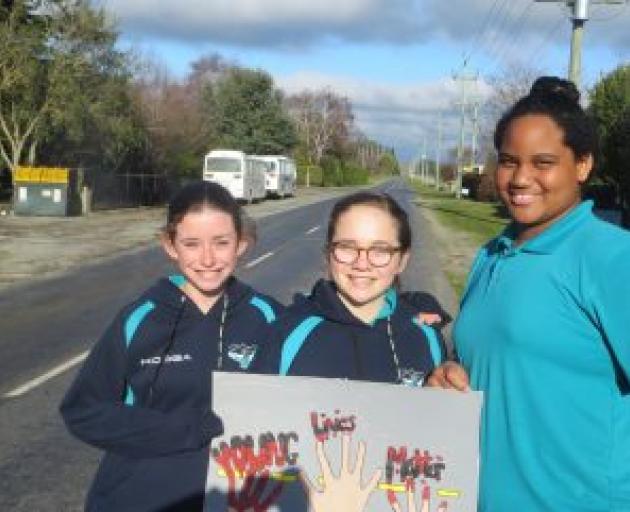 You’ll have blood on your hands if you leave the speed limit at 100km/h, the three Longbeach School students told Ashburton district councillors about five times their age.

Freya Jemmett, Taylor Lamont and Yasmin Larry are year 8 students at Longbeach and they can hear the speeding drivers on Longbeach Rd from their classrooms.

The students told councillors to be early adopters and reduce the speed limit outside their school now.

Principal Neil Simons said it wasn’t just Longbeach - all schools in the district need drivers to slow down when they pass a school.

The girls had done their homework before they spoke to councillors. They said it would take 98m for a car to stop in an emergency if the driver was doing 100km/h - or 122m in the wet. A truck would take longer to stop.

“Which do you think is the right speed past a school,” they asked councillors who met to hear submissions on proposed speed limit changes.

About 200 submissions were received when council consulted on its proposals. Councillors spent Monday afternoon making decisions that will be the subject of a report to the full council and adopted around the end of August.

'Young lives matter' was the loud and clear message from Longbeach School.

About 140 students attend Longbeach and the board of trustees also backed the girls’ message.

Simons said the intersection of Boundary and Longbeach Rds has already been the scene of two fatal accidents and students and staff regularly heard and saw near misses.

Roading reports had identified the area as high-risk because of its open speed limit and low visibility.

“This is a chance for the Ashburton District Council to be leaders around the country and step up and get ahead of the proposed national changes and make changes across the district around schools,” he said.

Several other schools made submissions for reduced speeds outside their schools.