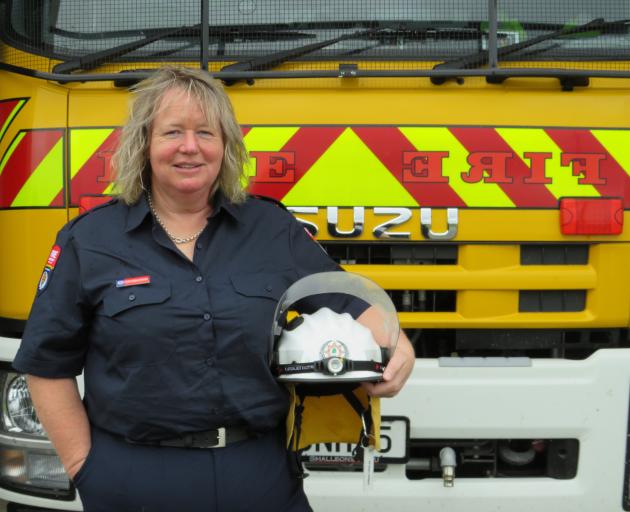 She is one of just a handful of women in a fire chief role South Island-wide, and the first Canterbury-wide.

She draws motivation from being a good role model for her teenage daughters, Penny and Amy, who are also volunteer ‘‘firies’’ at the station; husband Vaughan is not a firefighter.

Debs is a 21-year veteran and was deputy fire chief.

She was appointed to the top job after applying for the position vacated by Steven Russell who was in charge for 28 years.

Steven has stepped back from the role, but remains part of the crew at the station.

In other changes, Johnny White has been appointed deputy fire chief and Todd Smyth ranked an officer.

The changes took effect from July 1 and Debs is more than ready.

and considers the brigade and its members an extended family.

The station, formerly known as a rural fire unit, attends mostly vegetation fires (as a natural environment crew) and acts as back-up crew during house fires.

They have a fire appliance/tanker that carried just short of 6000 litres of water and up to six people.

Willowby attended 41 calls last year, many during the peak spring and summer seasons. They cover an area between the Ashburton and Hinds rivers, with a zig zag area just over State Highway 1 and out east to the coast.

Debs started with the station in late 1999, at a time when there were no female firefighters on the force; there are now six at the station.

She lived just 200m down the road. The siren went but wasn’t answered, then it went again and Debs thought “I could do that”, so she did.

Debs joined along with neighbour Louisa Russell, the wife of the former fire chief and together they proved themselves to the stalwarts in the brigade.

She proved to be quite good at it too, and turned out to as many fires as she could.

She has also pushed herself to learn, gaining qualifications along the way. And got involved in the station workings. She was secretary for many years and a trustee for around five years.

The new Willowby station office is one of the many benefits to come out of Fire and Emergency New Zealand’s nationwide amalgamation in 2017 of urban and rural fire forces. The station also has functioning toilets and a 30,000-litre water tank bought with support of businesses in the community.

There were now uniforms to wear for training, and practices and training requirements to meet. There was also more accountability required from volunteers.

The amalgamation has seen more structure involved in being a volunteer, which has its upside, but also put the onus on volunteers, Debs said.

The station lost a few volunteers during the initial amalgamation, Debs said, but had a steady crew of 20 in place now; 18 operational and two in management support.

Debs works as South Island manager for MaxCare, and travels to some remote rural communities.

She has the full support of the company which has equipped her company vehicle with a defibrillator, a fire extinguisher and first aid kit.

Debs also carries a full firefighter uniform, in case she needs to help other brigades in action.