Noel Lowe is approaching 80 and has weathered more than a few storms and lockdowns. 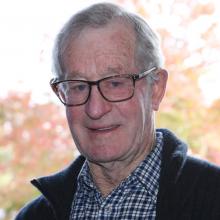 Noel Lowe
The former Ashburton Forks farmer was not yet in the world and off to Malvern Maternity Home with his parents when the car they were driving just made it over the Hinds River bridge before a complete wash out.

The bridge was out for months and it meant a sizeable detour for traffic.

‘‘It cut off the main South Island travel route and kept a number of people at home for a while.

‘‘The new bridge they put in at Hinds was the first in New Zealand with a hump in it and it’s still there today,’’ Mr Lowe said.

He has also lived through big snow dumps, windstorms, floods and earthquakes that have cut off parts of the community for days at a time.

‘‘My first experience of a local lockdown was the 1945 snowstorm. I remember waking up and looking out the window to see the snow level with the windowsill.

‘‘It was three feet deep. It lay on the ground for over four weeks. Roads and schools were closed, power poles were down and there were no telephones.’’

The snow event in 2006 did the same thing and forced communities to hunker down, show their resilience and live in isolation for a while.

As a school boy at Ashburton Forks School, Mr Lowe remembers the impact of the 1947 polio outbreak.

‘‘I was just seven at the time, but I can still vaguely remember it. There was no school for three months, which was great for us kids.’’

Mr Lowe is taking the current coronavirus lockdown in his stride and is adapting to the situation alongside his wife Audrey.

Regular walks and bike rides are keeping him active.

‘‘Our citizens will emerge stronger from this current experience, unfortunately our businesses will suffer from the monetary inactivity and some of them will fail and fall by the wayside.’’

Mr Lowe farmed for nearly 60 years and has lived in Ashburton for the past 12.

He is an active member of Ashburton Pakeke Lions, and its current president, and is also a keen photographer.

He and some of his Lions friends have been growing beards during lockdown, but Mr Lowe’s came off shortly before a funeral he went to last week.

‘‘I thought it would be disrespectful to have the beard, so it had to come off.’’