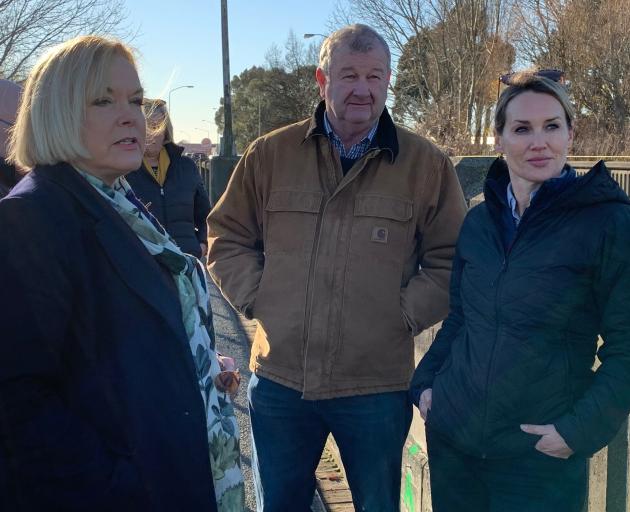 National Party leader Judith Collins (from left), Ashburton Mayor Neil Brown and Selwyn MP Nicola Grigg at the Ashburton State Highway 1 bridge on Saturday. Photo: Supplied
Judith Collins has echoed numerous calls for the Government to help Ashburton for a second bridge and to "not play silly games" around its infrastructure priorities.

And like many Mid Cantabrians before her, she could not help but draw comparisons to a certain bridge in Auckland, whilst putting the Government's roading and infrastructure spend under scrutiny.

The May 30-31 flooding event has reignited discussion on a long awaited second bridge over the Ashburton River after the town's sole overpass copped foundational damage as a result of the floods.

Talk only intensified after Transport Minister Michael Wood unveiled plans for a $785 million cycling and walking overpass alongside the Auckland Harbour Bridge, the same week the Ashburton district grappled with floodwaters and no bridge.

Now the leader of the opposition has joined in the debate when she was in Ashburton on Saturday visiting the flood-damaged district.

"They need about $40 million dollars which in the grand scheme of things is not enormous for a government," Collins said.

"Particularly when there's a cycle bridge over the Auckland Harbour that Aucklanders don't need or want...at three quarters of a billion dollars and Ashburton only needs 40 (million)."

The Ashburton District Council is working through a three stage strategic business case for a second bridge which is to be presented to Waka Kotahi NZ Transport Agency (NZTA).

The second phase has recently been delayed and is scheduled to be completed by September after council requested data from the floods be incorporated into its report.

But Mayor Brown has called for more Government support beyond its 51 per cent threshold for the project following the floods.

There is no business case for the proposed Auckland bridge.

"You have places like Ashburton that produces funding and money that pays the bills getting told 'oh we'll wait and wait'...why," Collins said.

"I think Waka Kotahi should stand up and look after the people who pay the road user charges and petrol taxes."

"Let's just say to the people of Ashburton, I don't want the stupid bridge either."