Retired councillor would do it again 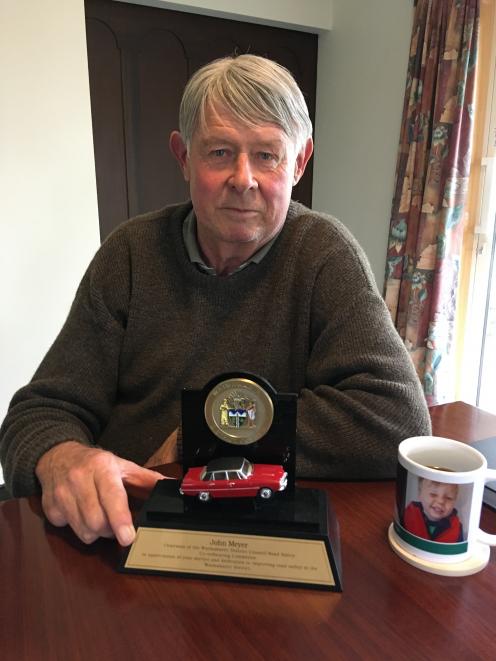 John Meyer received a special trophy depicting his Rover P6B, in recognition for serving as chairman of the Waimakariri District Council's road safety committee for the last nine years. Photo: David Hill
John Meyer says he has enjoyed working as part of ''some great teams'' during his time in local government.

He retired this month from the Waimakariri District Council after five terms as a councillor, but will continue to serve on the Kaiapoi-Tuahiwi Community Board.

''If I had the opportunities again I would certainly do it. It's been that pleasurable and we've had some great teams,'' Mr Meyer says.

He was first elected to the Ashley County Council in 1973, when he was aged 25 and living in Amberley.

''It was my involvement with Jaycees in Amberley which led to me standing. They nominated me for council and I got on.

''Councillors in those days didn't get paid, so I appreciate these people who say they need more support. But I was lucky. Lynda was a teacher and I had a good firm I was working for who encouraged me and liked the idea of me being on the council.

''It was a really good learning curve and it was so enjoyable and challenging.''

After two terms on the Ashley County Council, the Meyers returned to Kaiapoi where Mr Meyer joined the family business at Williams Garage, now the Caltex service station.

In the 1980s Mr Meyer joined the Kaiapoi High School board of governors before being elected on to the board of trustees and serving as board chairman.

He was first elected to the Waimakariri District Council in 1995 and served two terms as Kaiapoi Community Board chairman before missing in 2001 by just four votes.

''In those first two terms we had really good teams. We had some big challenges with the sewage system, growth and the roundabouts.

''The sewage system was corrected and sent out to sea rather than into the river, and the town was growing far faster than we thought it would.''

In 2010 he was re-elected to the council and has served on the local community board in all but three of the last 24 years.

''You can do little things as an individual, but, for the big things, working as a team makes it far more achievable.''

Given many councillors are juggling jobs or running businesses, Mr Meyer wonders whether there should be fewer councillors to make it a full-time role and more authority could be delegated to community boards.

''I think there's some merit in it and I think it would be fairer. That will come up for discussion again in the review period and those questions will be asked in a democratic way.''

The Meyers have two adult children and four grandchildren.

In his retirement, Mr Meyer plans to spend more time with his grandchildren, in his garden, working on his classic cars, and whitebaiting.