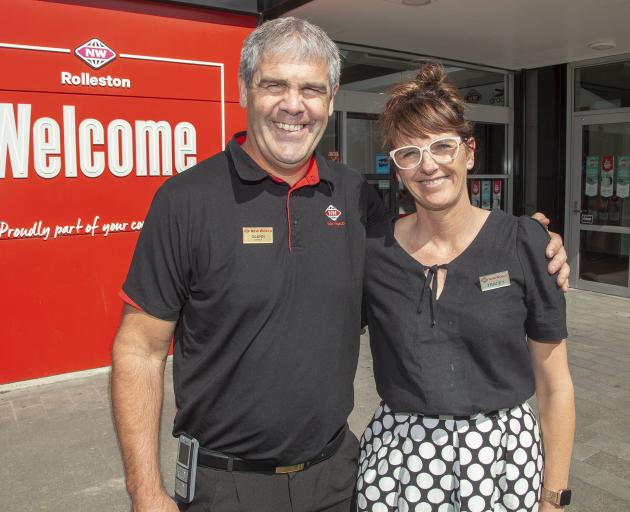 Glenn and Tracy Anderson. Photo: Geoff Sloan
About 18 years ago Glenn Anderson left a corporate position with Nestle for a hands-on role as a supermarket manager.

He and his wife Tracy Anderson haven’t looked back since and are now the new owners of New World in Rolleston.

They started in their new role about five weeks ago. They have previously managed supermarkets in Nelson, Waimate and Christchurch.

Glenn said some of the things that have kept him in the supermarket industry for so many years are the people he gets to serve and the teams he has worked with.

“It’s your team that you really enjoy and your costumers as well. So it’s a combination of both of those.”

Rolleston residents have been friendly and good to deal with.

“It’s amazing how many of the customers have come up to me and introduced themselves.

Tracy said taking over the ownership of the Rolleston store, which employs about 200 people, will be a challenge but she is excited about it.

“We were looking forward to the challenge of a bigger store so, for us, we’re obviously a husband and wife team so we complement each other quite nicely.

“For us, it was a business challenge, but also it was a wee bit about coming back to our roots,” she said.

There have been many memorable moments during Glenn’s time managing supermarkets but a few stand out.

Said Glenn: “We had a nude man walking through the shop one time, so we had to try and get him under control a little bit.

Glenn and Tracy have made the move to Christchurch with their two children Xavier and Bree, who have both left school.

Glenn said it is exciting to be able to serve the Rolleston community and the store prides itself on its selection and service.