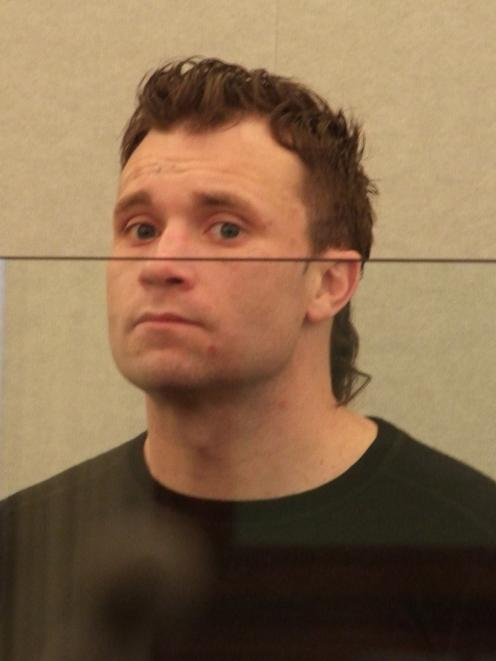 Cannan Yeo was locked up for 14 months after two violent incidents. PHOTO: ROB KIDD
An Oamaru man arrested during the level 4 lockdown deliberately coughed on police and told them "I've got Covid-19", a court has heard.

Cannan Yeo (33) appeared in the Dunedin District Court yesterday after pleading guilty to aggravated drink-driving, assaulting police and assault with intent to injure.

The defendant, who had already been convicted of driving while intoxicated in 2017 and 2019, was seen leaving a Stirling St driveway on May 15.

Police database checks showed there was a warrant to arrest Yeo and they signalled for him to pull over.

While being handcuffed, the man became "argumentative", court documents said.

The constable dealing with him was trying to distance himself from Yeo, which sparked a strange response.

The defendant yelled "I’ve got Covid-19" and coughed in the officer’s face.

Because of the nationwide lockdown at the time, the victim was immediately stood down and sent home, where he remained until a medical test cleared him of having the virus.

At the station, Yeo gave a breath test of a different kind.

His sample gave a result of 777mcg of alcohol per litre of breath — more than three times the legal limit.

Following the offending, Yeo remained in custody until yesterday.

Judge Mark Callaghan said the deliberate coughing on a police officer was ‘‘pretty low’’ but it was the defendant’s earlier offending that was more serious.

On December 19 last year, the court heard, Yeo became embroiled in a heated argument with his partner at a Taranaki home.

He was asked to leave and his sister, who was also present, followed him out.

Yeo responded by punching her in the mouth, damaging her front teeth and knocking her over.

Despite hitting her head on the concrete, the victim got up to confront her brother again.

This time Yeo punched her between the eyes, breaking her glasses.

He then hit her on either side of the head, grabbed her hair and punched her again in the mouth, splitting her lip.

When interviewed by police, Yeo was candid about the cause.

The victim said the incident made her feel as though she had lost her brother for life.

Despite the severity of the attack, she forgave him and said she hoped he got treatment for his addiction.

"He is a great guy when he is not affected by drugs or alcohol," she said.

Yeo was jailed for 14 months and banned from driving for a year and a day.

Judge Callaghan gave him leave to have the sentence converted to home detention should an address be made available.