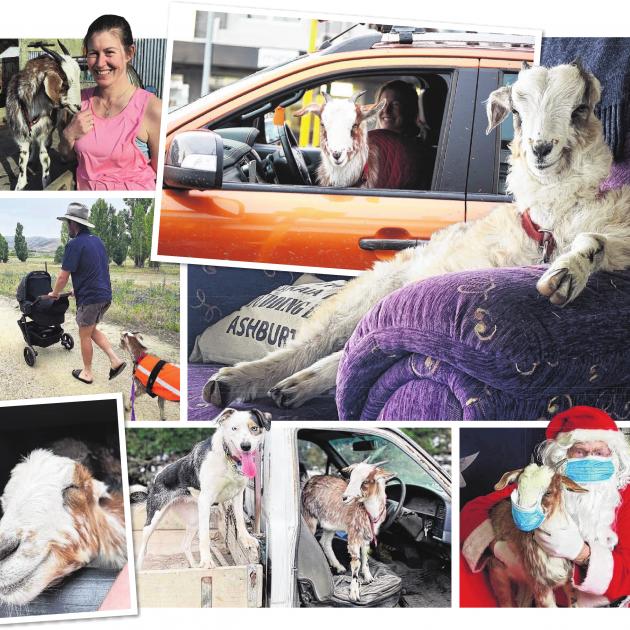 Ralph the goat enjoys many adventures with his owners Alan Harvey and Alice Perry. PHOTOS: ALICE PERRY/REBECCA RYAN/SALLY RAE
This is the story of Ralph the goat.

Ralph is no ordinary goat. He resides on a farm near Weston, in North Otago, where he lives the proverbial life of Riley.

His life could have been so very different — in fact, his name could well be Lucky — given he was spotted during a goat culling trip.

His story begins in June last year, in Central Otago, where feral goats were common pests.

North Otago farmer Alan Harvey was on a yearly goat hunting trip when the little kid, believed to be 4 or 5 weeks old, was spotted.

It was likely that he was orphaned and it was very fortunate for him that he stood still and was uplifted, Mr Harvey’s partner Alice Perry said.

The Harvey family already had a goat called Charlie, who was used for roadside vegetation control.

But Charlie was getting older and they realised he needed an assistant who would then potentially take over from Charlie when the day came.

It was about 5.30pm on a Friday when Ms Perry got a call, asking her to drive to the Ida Valley and pick up the kid.

She still had stock work to do on the farm and so it was about midnight when she finally arrived home with Ralph, who travelled in the front of the ute.

"He pretty much didn’t say a word," she recalled.

The timing could not have been better, as Charlie died about three weeks later.

Ralph has made himself very at home and is an important part of the family, considered the big brother of the couple’s young daughter Ella, who was born in November last year.

A child’s gate stopping access to the kitchen was not for Ella yet, it was for Ralph. A fire stand was imminent after Ralph’s left shoulder failed to obey the one-metre rule.

His three favourite foods were tomato sauce, butter and Weet-Bix and there were some fears Ralph could become the first diabetic goat.

He liked chocolate and was particularly partial to sherbet fizzy lollies from Oamaru’s Rainbow Confectionery.

He used to go through "kilos and kilos" of those lollies but through concern about the amount of sugar has was consuming, he had being redirected down the Weet-Bix path, Ms Perry said.

Ralph slept indoors, on a duvet next to the couple’s bed. He used to be in the bed, until Mr Harvey got a little sick of that.

He had a period of sleeping outside but, after he poisoned himself for about the fourth time — rhododendrons three times, and another identified substance — it was safer for him to be inside, she said.

One downside was that goats pooped in their sleep but that was "not every night". Prior to his tenure outside, Ralph was nearly 100% toilet trained, but occasionally he forgot that.

At dinner time, he had to be either kicked outside or tied up, otherwise he would jump up everywhere and try to help himself to food.

He also liked power cables, the more expensive the better, but otherwise, there were few downsides to living with a goat.

He went everywhere with the couple. He tended to get nervous if left alone in the truck and once set its alarm off outside the Opera House which was slightly embarrassing.

He went on summer camping trips with the family, staying in their caravan and chilling out — "he likes relaxing" — and he had a fluorescent dog coat so people knew he was not wild.

He had posed with Santa Claus for the obligatory Christmas family photograph, albeit with a difference, and Santa thought he was the "bee’s knees".

While Ralph was a little unsure initially about the arrival of Ella, he had proven to be "a good big brother".

Such was Ralph’s popularity that the yearly goat culling operation was now more like "find a baby goat", Ms Perry said.

But she also acknowledged that a lot of work had gone into him — "he was intensively reared but to get this", she said, indicating Ralph as he lounged around on a sheepskin in the living room, and followed her outside like a dog.

When he first arrived, he refused a bottle and she ended up feeding him small amounts every couple of hours, including through the night. He wore a cloth nappy.

Ms Perry was a keen sportswoman but Ralph was not quite up to being a training partner.

"He’s just a bit slow; he gets quite tired quite quickly.’

He had been for walks around Oamaru and 10km was about his limit. She once ended up pushing a pram and carrying the 35kg goat, uphill, when he ran out of puff.

Ralph was useful on the farm — "he’s a cattle goat and a sheep goat" — and was sometimes more use than the farm dogs, Ms Perry said.

He was also a dab hand in the garden. She showed how she did not have to do any rose pruning, although she wondered if she would have any roses this year. He had even managed to prune one particular shrub into a ball-like shape.

Ralph, who had an occasional shower, was surprisingly good at cleaning himself, although he did track a bit of mud into the house with his hooves, but Ms Perry was not bothered — "they invented vacuum cleaners for a reason".

Asked about the life expectancy of a goat, Ms Perry said she looked at the care Ralph received as either prolonging his life, or shortening it — "hopefully it’s the former".

"He’s like the bichon frise that everyone carries around but he’s way more fun." 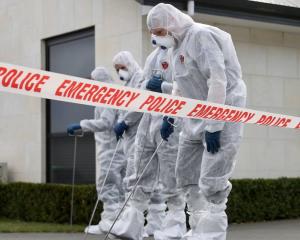 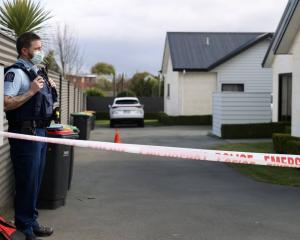 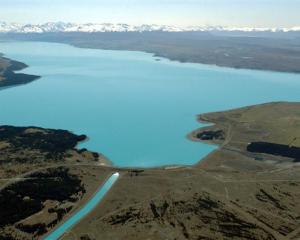