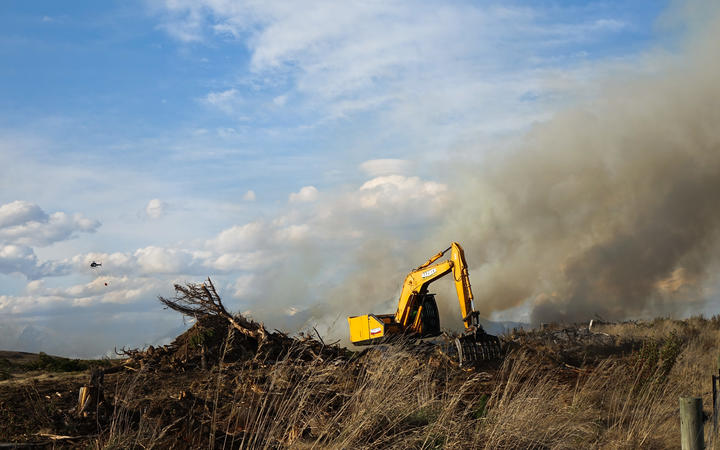 Diggers and bulldozers are still being used at the site of the Lake Ōhau fire. Photo: RNZ / Tess Brunton
Farmers are being short-sighted by claiming that the loss of grazing land has helped to fuel the devastating fire at Lake Ōhau, a plant ecologist says.

The fire, which has burnt through 5600 hectares in the MacKenzie Basin and damaged or destroyed at least 40 homes in the village on the shores of Lake Ōhau, is 60 percent under control and may be brought fully under control today.

Farmers are pointing to wilding vegetation as fuel for the fire.

Federated Farmers High Country Committee chairman Rob Stokes said closing up land for national parks means the ground is not grazed by sheep and cattle and tussocks and grass are left to grow wild.

But plant ecologist Professor David Kelly, from the University of Canterbury, told Morning Report that stopping grazing is an essential part of a long-term management plan for conservation department reserves.

Kelly, who has worked in the area for many years, said criticism of DOC is misplaced and people saying this were not taking the long-term view of what was best for the land.

"Even the farmed areas here are still very flammable - there's grass and shrubs and so on. That's shown by the fact that there are quite a lot of fires there. There was one just north of Lake Ōhau Lodge 20 years ago.

"The key is the least flammable vegetation in this whole area is the native beech forest, which is native to that side of the lake... and if you can get away from that long grass to either native shrubs or getting towards native forest you end up with a much less flammable landscape."

It was appropriate that DOC moved in this direction and it would also be helpful for biodiversity, he said.

Rob Hands from Fire and Emergency, who is in charge of the fire scene, did not agree that a lack of proper management had meant there was a build-up of fuel to feed the fire.

"I think the fuel we're talking about in this area, is a mix of grazed or not grazed, conservation estate with wetland values etcetera or natural values. There's commercial forested area, and then there's lifestyle blocks themselves so there's a mixture of fuel loadings and that's the interesting thing about this fire.

"It's burnt through some heavy fuels, and then some lighter fuels and then got to where there's no fuel."

Kelly said the drawback to stopping land being used for grazing, was a short-term increase in flammability. However, action needed to be taken immediately because it would take 20 to 30 years to get the necessary increase in native shrubs and beech and in the meantime climate change meant an increased risk of huge fires.

In the short-term the removal of wilding pines that are proving such a major problem in the current California blazes is crucial, he said. There has been tremendous progress on that, he said.

The second aspect is to be really careful on accidental or deliberate fires starting.

Helpful conditions
Drones will be in the air this morning to map hot spots of the Lake Ōhau fire in the Mackenzie Basin.

Crews remained on site overnight to keep track of the fire, which started on Sunday.

Conditions have been benign so far today - yesterday the winds varied between 80km/h to 160 km/h, Hands told Morning Report. A southerly change expected today may bring a bit of rain and snow down to 800 metres today.

The fire was 60 percent under control yesterday, and they were aiming for full control today. There were three pinch points causing some challenges. They are in locations in a north west corner in the hills, in a south east area down on farmland near some forest, and the third is near a property but will not threaten it, Hands said.

"The efforts right from the beginning with the evacuation meant that we didn't have to focus on life. We were working on the structures and getting containment of the perimeter."

Firebreaks have been put in since day one - about eight heavy machines including bulldozers and diggers are still being used.

No helicopters are being used today.