Stranded after 4WD gets stuck 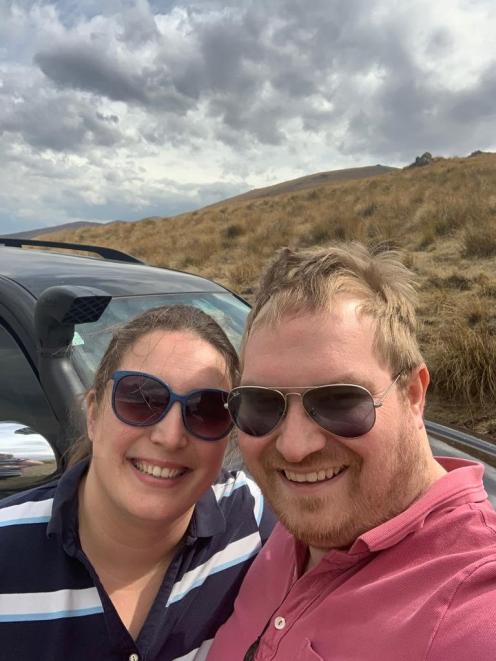 Margitta and Rob Roodnat with their Toyota Prado, which got bogged down, leaving them stranded in the middle of Danseys Pass on Sunday and Monday. PHOTOS: SUPPLIED
Crossing a river naked with his wife in the middle of nowhere was memorable for all the wrong reasons, Rob Roodnat says.

The Oamaru community project manager and his wife Margitta decided to take a four-wheel-drive day trip over Danseys Pass on Sunday, but the couple’s Toyota Prado got bogged down about halfway along the pass, leaving them stranded.

"The road was very, very muddy and wet. I tried to bypass a big puddle and then we got stuck," Mr Roodnat said.

"It was about 4.30pm, so right then and there, I knew that we were never going to make it out in one go."

They spent about two hours trying to dig the vehicle out, using a shovel and boards, but to no avail.

"We were knackered. So we decided to stay the night in the truck.

"We were only prepared for a day trip, so we only had some soda, some water and some candy. That was about it.

"It was very cold overnight. I started the truck about five or six times just to get some heat in."

At dawn, the couple started walking back down the track to Tailings Hut, which was about four hours’ walk.

"Along the way, we had to cross a river, which we did fully naked to make sure our clothes didn’t get fully wet.

"It was freezing — memorable for all the wrong reasons."

Before they reached the hut, they came across a motorcyclist from Wellington, who rode to an area where he could alert emergency services to their predicament.

"We were very lucky to have met him because he provided us with some food and some water.

"We were getting pretty hungry."

The couple carried on to the hut to shelter from the cold wind and waited for a police Land Search and Rescue team to arrive.

About 7pm on Monday a LandSAR team arrived at the hut, he said.

"They were lovely. They helped us get the truck out and followed us back out to Naseby, and then we went our separate ways," Mr Roodnat said.

The incident had been a shock for them.

"There were some big lessons learnt.

"Always be prepared — always take a personal locator beacon with you, and take food and blankets with you.

"You never know what could go wrong."