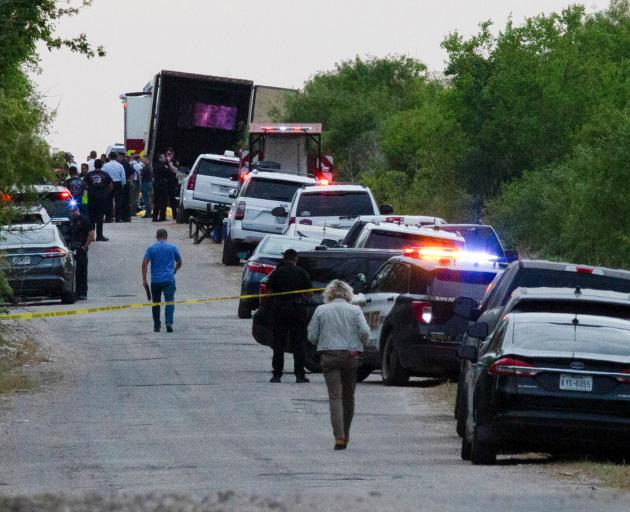 Fifty-three people died in sweltering conditions in the truck. Photo: Reuters
A US grand jury has indicted four men including the suspected driver in connection with the death of 53 migrants amid the sweltering heat during a smuggling attempt last month in Texas, federal prosecutors say.

Dozens of migrants were packed into the back of a tractor-trailer that was found on the outskirts of San Antonio on June 27, officials said on Wednesday.

All four had been previously charged by prosecutors. The more serious grand jury indictments in San Antonio move the accused one step closer to trial.

The alleged driver, Homero Zamorano Jr. (46) of Pasadena, Texas, and co-defendant, Christian Martinez (28) of Palestine, Texas, could face the death penalty or life in prison if convicted, according to a statement from the US Attorney's Office for the Western District of Texas.

The two American defendants were indicted on an array of charges for conspiracy to transport undocumented immigrants resulting in death and serious bodily injury.

Prosecutors announced separately that a grand jury also returned indictments against two Mexican citizens suspected of possession of a firearm while unlawfully present in the United States.

Juan Claudio D'Luna-Mendez (23) and 48-year-old Juan Francisco D'Luna-Bilbao each face up to 10 years in prison if convicted, prosecutors said.

Reuters could not reach any defence lawyers for a statement on behalf of the accused.

The truck, carrying migrants from Mexico, Guatemala, Honduras and El Salvador, was discovered abandoned in a desolate, industrial area near a highway about 160 miles (250 km) north of the U.S.-Mexico border.

Temperatures in the area that day had soared as high as 39.4 degrees Celsius.

About half the victims who died were Mexican and others were from the Central American countries of Honduras, Guatemala and El Salvador, Mexico's government said.