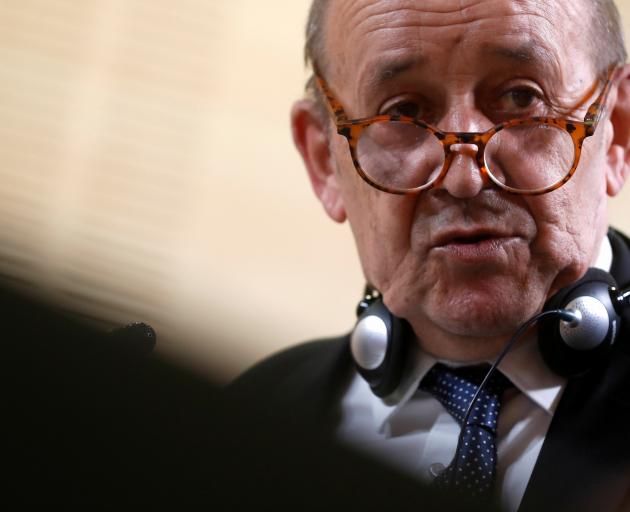 French Foreign Minister Jean-Yves Le Drian: "I am angry and bitter. This isn't done between allies." Photo: Reuters
France has accused US President Joe Biden of stabbing it in the back and acting like his predecessor Donald Trump after Paris was pushed aside from a historic defence export contract to supply Australia with submarines.

The United States, Britain and Australia announced on Thursday they would establish a security partnership for the Indo-Pacific that will help Australia acquire US nuclear-powered submarines and scrap the $US40 billion ($NZ56 billion) French-designed submarine deal.

"This brutal, unilateral and unpredictable decision reminds me a lot of what Mr Trump used to do," Foreign Minister Jean-Yves Le Drian told franceinfo radio.

"I am angry and bitter. This isn't done between allies."

It is the latest dramatic twist in a contest that has seen naval shipbuilding powers battle for years over what many observers called the world's largest single arms export deal.

In 2016, Australia had selected French shipbuilder Naval Group to build a new submarine fleet worth $US40 billion to replace its more than two-decades-old Collins submarines.

"It's a stab in the back. We created a relationship of trust with Australia and that trust has been broken," Le Drian said.

French relations with the United States soured during the presidency of Trump, who often irritated European allies by demanding they increase their defence spending to help NATO while reaching out to adversaries like Russia and North Korea.

Diplomats say there have been concerns in recent months that Biden is not being forthright with his European allies.

The French Embassy in Washington said it was cancelling a gala event related to French-US ties on Friday following the day's events.

France's ties with British Prime Minister Boris Johnson have also soured over the United Kingdom's exit from the European Union.

Washington's actions in Australia are likely to further strain transatlantic ties, political analysts said. The European Union was due to roll out its Indo-Pacific strategy on Thursday and Paris is poised to take on the EU presidency.

"This is a clap of thunder and for many in Paris a Trafalgar moment," Bruno Tertrais, Deputy Director of the Paris-based think tank the Foundation of Strategic Research said on Twitter, referring to a French naval defeat in 1805 that was followed by a long period of British naval supremacy.

He said it would "complicate the transatlantic cooperation in and about the region. Beijing will benefit."

US Secretary of State Antony Blinken on Thursday said France was a "vital partner" in the Indo-Pacific region and that Washington would continue to cooperate with Paris, comments that appeared aimed at calming French anger.

Those comments are likely to fall on deaf ears in the immediate term.

A French official said they had not been informed of the deal until a few hours before it was announced and that Paris would not fooled by platitudes.

Morrison said Australia looked forward to continuing to work "closely and positively" with France, adding: "France is a key friend and partner to Australia and the Indo-Pacific."

Analysts said the loss of the much bigger submarine contract was a significant blow to France, whose experienced arms sales machine had gone all out to wrest the submarine deal from likely winner Japan under then defence minister Le Drian in 2016.

Germany had also been in the race.

The 2016 win came a decade after France radically overhauled the way it handled arms sales following Paris' embarrassment over the loss of a contest to sell fighters to Morocco.

Word of its cancellation dominated Europe's largest arms fair in London where one delegate called it "jaw-dropping".

France's Thales, which analysts say stood to gain about $US1 billion from sales of sonars and optronics - the eyes and ears of the French submarines - swiftly reassured investors its 2021 finances would not be hit.

But some analysts warned France's furious reaction over the Australian contract could backfire and noted there had been reports of Australian doubts over the pace of implementation.

"Betrayal is the wrong language and hurts France's position in Australia; it can poison the well," said UK-based defence analyst Francis Tusa, adding France would now be more reliant on selling Rafales to secure its place in the global arms market.