Americans sunbathed on beaches, fished from boats and strolled on boardwalks this holiday weekend, even as the US death toll from Covid-19 fast approaches 100,000.

The Memorial Day weekend that signals the start of summer in the United States is normally a time when cemeteries across the nation fill with American flags and ceremonies to remember those who died in US wars.

As the U.S. death toll from COVID nears 100,000, this is how people spent Saturday at Lake of the Ozarks in Missouri. pic.twitter.com/EBZKCQjRKf

This year it has also become a time to mourn the loss of more than 97,000 people due to the coronavirus pandemic in the US.

The New York Times filled its entire front page with the names and selected details of 1000 victims on Sunday seeking to illustrate the humanity of the lives lost.

"We were trying to capture that personal toll," Marc Lacey, the newspaper's national editor, told Reuters. "We were trying to humanise these numbers which keep growing and have reached such unfathomable heights that they're really hard to grasp any more. ...This is about everyday people. It's about a death toll, reaching a number that's really just jaw-dropping."

Among the victims, drawn from obituaries and death notices in hundreds of US newspapers: Lila Fenwick (87), the first black woman to graduate from Harvard Law; Romi Cohn  (91), saved 56 Jewish families from the Gestapo; Hailey Herrera (25), a budding therapist with a gift for empathy.

All 50 states have relaxed coronavirus restrictions to some degree. In some states, like Illinois and New York, restaurants are still closed to in-person dining and hair salons remain shuttered. In many southern states, most businesses are open, with restrictions on capacity.

Last week, 11 states reported a record number of new Covid-19 cases, including Alabama, Arkansas, Minnesota, North Dakota, New Hampshire, Maryland, Maine, Nevada, Utah, Virginia and Wisconsin, according to a Reuters tally. It is not clear if the cases are rising from more testing or a second wave of infections.

Total US cases are over 1.6 million, the highest in the world, while forecast models for possible Covid-19 deaths predict the death toll will exceed 100,000 by June 1. 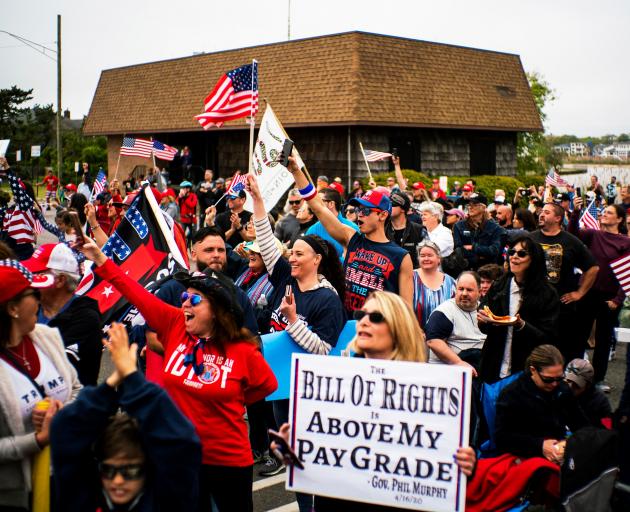 People take part in a protest to reopen all businesses after some New Jersey beaches were opened during the Memorial Day weekend. Photo: Reuters

A plea by health officials and many state governors to wear masks in stores and in public is being met with protest and resistance from some Americans. Social media is filled with videos of businesses turning away a few angry customers who refuse to cover their mouths and noses.

"We need to be wearing masks in public when we cannot social distance. It's really critically important we have the scientific evidence of how important mask-wearing is to prevent those droplets from reaching others," Dr Deborah Birx, response coordinator for the White House coronavirus task force, said on Fox News Sunday.

While Americans were largely adhering to warnings to maintain social distancing over the holiday weekend, there were notable exceptions.

These included some packed beaches in Florida and other gulf states, forcing authorities to break up large gatherings. Videos posted on social media showed parties in other states where people crowded into pools and clubs elbow-to-elbow.

One such party at a Houston club called Cle prompted the city's Mayor Sylvester Turner on Sunday to order firefighters across the metropolitan area to enforce social distancing rules.

Last week Turner said authorities would not forcibly make sure businesses were operating at capacity restrictions of 50% for restaurants and 25% for bars. But he reversed course after more than 250 crowd complaints were phoned into the city by Sunday evening.

"There are too many people who are coming together going to some of our clubs, our bars, to swimming pool parties, with no social distancing, no masks," Turner said.

"It's clear people are crowding in, looks like to maximum capacity, almost on top of one another."