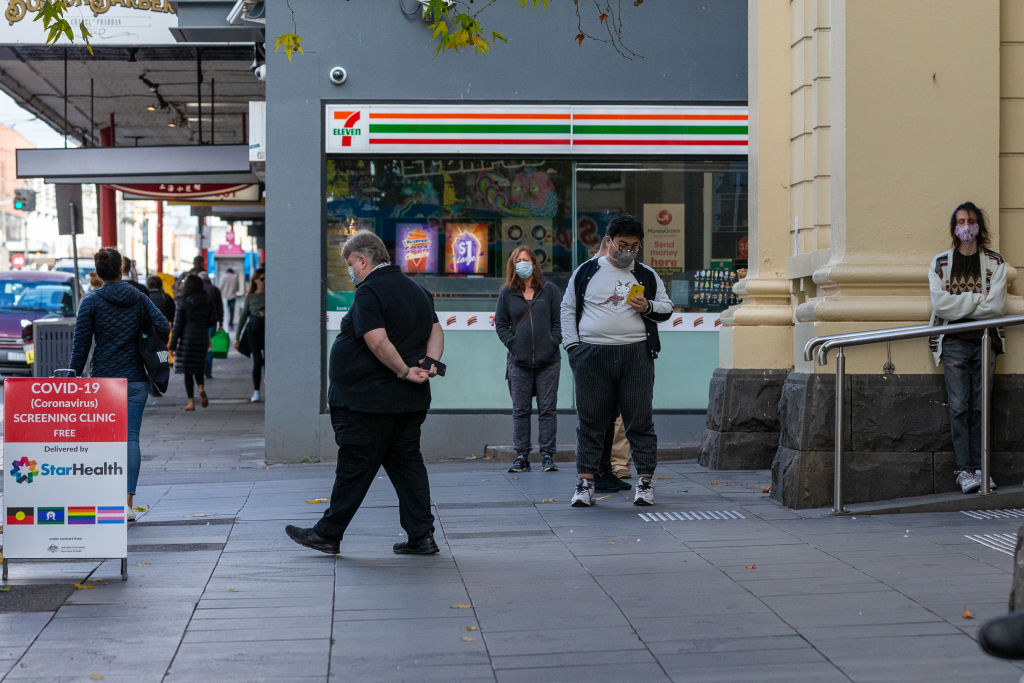 People line up outside a Covid-19 screening clinic in the inner city Melbourne suburb of Prahran. Photo: Getty
Victoria has recorded another death linked to the coronavirus, as the outbreak-hit state confirmed 216 new cases.

It had a record 288 cases on Friday, as the World Health Organisation reported the biggest one-day increase of new cases globally at 228,102.

A man in his 90s died overnight while 49 remain in hospital, including 15 in intensive care, Victorian Premier Daniel Andrews said on Saturday.

"As inconvenient and as challenging as it is, we cannot deny the reality of the situation we face, and we cannot pretend that doing anything other than following the rules will get us to the other side of this," he said.

He also asked Victorians not spend time trying to find ways to get around the lockdown rules and instead follow them.

"We don't have the luxury of ignoring the reality we face, nor of thinking there's some other strategy that will just drive these numbers down so it doesn't matter 'if I'm not compliant' with the strategy that's in place," he said.

The latest death brought Australia's toll to 107 since the pandemic began.

The number of confirmed cases across the country now stands at 9602, after there were two more cases in Queensland and seven in NSW on Saturday.

Queensland's new cases are people returning from overseas, as are five of the NSW cases.

Such has been the pace of the COVID-19 spread on home soil, the federal government is halving international flight arrivals to ease pressure on hotel quarantine systems, meaning 4000 fewer people will be able to return home each week.

Returning Australians will also be made to pay for their two-week stay in hotel quarantine.

Federal government minister Darren Chester said Australia needs to get on top of the COVID-19 outbreak and ensure there is capacity to cope with those entering the quarantine period.

"We've seen the case here in Victoria where the quarantine hasn't worked for a variety of reasons, and there's inquiries under way to make sure we don't repeat those mistakes," Mr Chester, a Victorian himself, told ABC television.

"But we need to make sure that we are able to cope with the number of returning passengers from overseas."

"First and foremost you can't have a situation where there is some real economic barrier ... for Australians who want to return home," Mr Wilson told ABC television.

"It's not unreasonable to consider people making a contribution to the costs of quarantine but ... you'd hope that that cost is reasonable, and that there's some consideration of people's capacity to pay."

"If you can't achieve the social distancing, another precaution, another step you can take is to wear a face mask to again reduce your exposure," he said.

The new cases came as Queensland opened its borders on Friday to interstate travellers, except those from Victoria, for the first time since March 25.