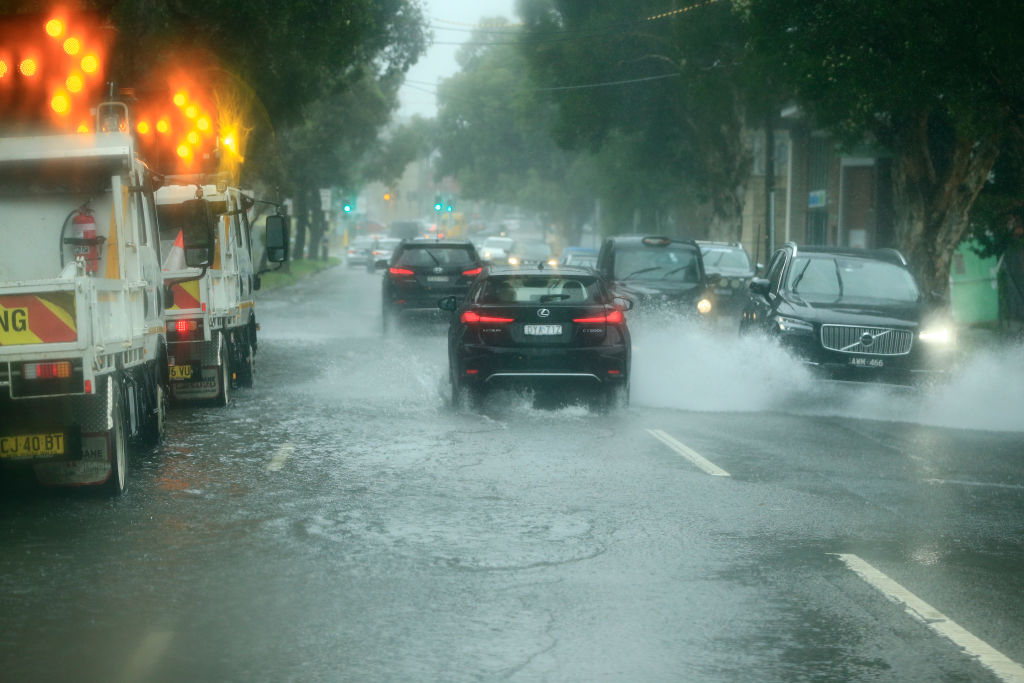 Cars travel through flooded roads in Sydney earlier this week. Photo: Getty Images
More than 30,000 homes and businesses across Sydney and the Central Coast may remain powerless into the weekend, with forecast rainfall set to compound damage caused by heavy storms.

The State Emergency Service says NSW residents should take steps to avoid property damage, while those already prepared for flooding should leave sandbags and precautionary measures in place.

Those with properties at risk of inundation should raise items such as furniture as high as possible onto benches or tables.

The Bureau of Meteorology issued a severe thunderstorm warning late on Tuesday for parts of the northern rivers, mid-north coast, northwest slopes and plains and northern tablelands forecast districts.

The NSW coast was drenched over the weekend, with up to 550 millimetres of rain falling across parts of the northern rivers, mid-north coast, Central Coast, Sydney, Blue Mountains and the Illawarra.

Ausgrid said power had been restored to 109,000 customers after "one of the worst storms to hit our network in the past 20 years", but about 31,000 customers remained without power at 7am on Wednesday.

"Customers are being advised to prepare for outages into the weekend ... additional crews from Queensland, Victoria and South Australia are arriving to assist with the response," Ausgrid said in a statement.

Emergency services were on Tuesday left to clear fallen trees, remove debris and extract cars from floodwaters around the Harbour City.

The SES on Tuesday night said it had received some 12,951 requests for help since last Wednesday night, with 10,660 call-outs completed.

"I understand they've been in touch with our energy minister to say they want to put that request in, and that's mainly to support getting rid of trees and other things so the technicians can get in there and restore the infrastructure," Premier Gladys Berejiklian told the Seven Network on Wednesday.

"Of course there's been substantial cost but we have the strength to rebuild."

In northern NSW, Byron Bay and Tweed Heads could each receive 15-50mm on Wednesday, while Coffs Harbour could get 15-40mm.

The BOM is saying 15-45mm is possible in Nowra on Wednesday, while on Thursday the South Coast town could get 40-80mm.