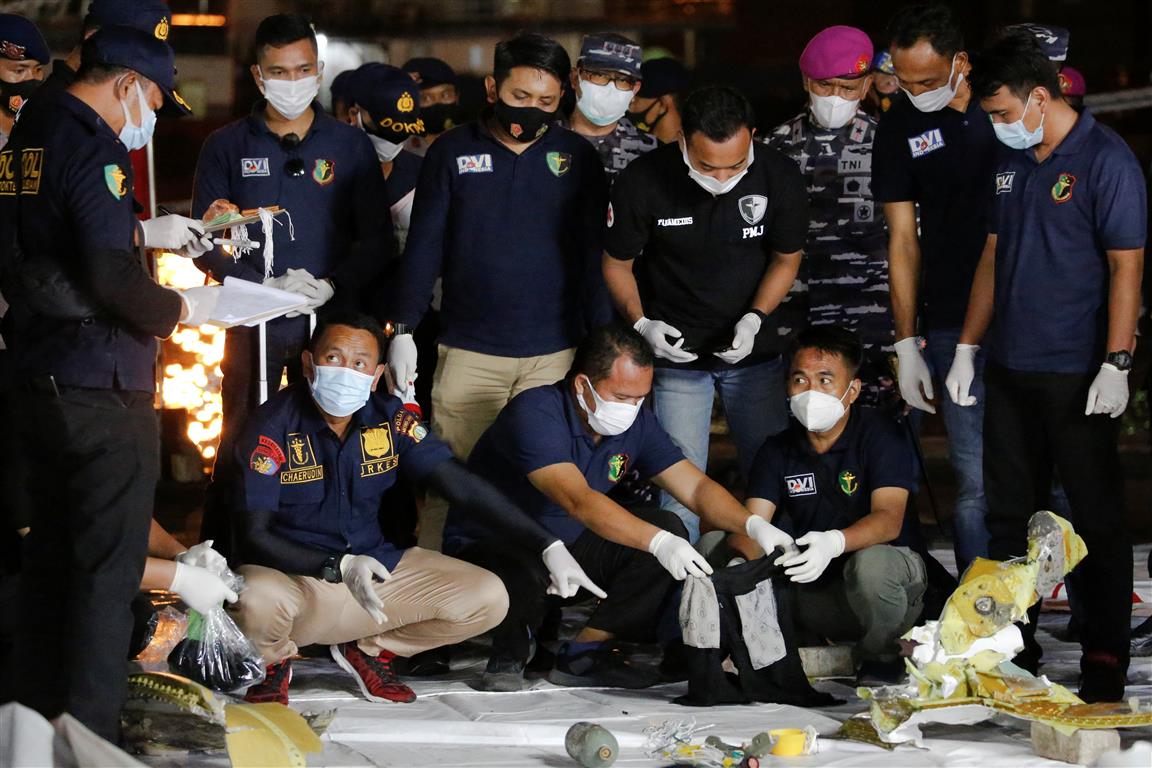 Disaster Victim Identification officers at Jakarta's Tanjung Priok port look through items found at sea thought to have come from the crashed plane. Photo: Reuters
Indonesian divers on Monday will try to retrieve the data recorders of a Sriwijaya Air jet that plunged into the sea two days ago with 62 people on board minutes after take off from Jakarta's main airport.

The SJ 182 was headed on a domestic flight to Pontianak on Borneo island, about 740km from Jakarta, on Saturday before it disappeared from radar screens four minutes after take-off and crashed into the Java sea.

Authorities pinpointed the area where the data recorders, known as black boxes, are located on Sunday as they lifted chunks of the Boeing 737-500 fuselage off the sea bed. Rescuers have also found human bodies and their personal effects.

One of the navy divers aboard a rescue ship said the search would resume on Monday with weather conditions improving.

"We can narrow the search area today to 200 to 500 metres from the point location," he told Kompas TV channel.

"On the first day, we had been scouring 1.5 kilometres to 1 kilometres (from the main coordinates). We've looked through the outer areas now."

He told Reuters the jet may have been intact before it hit the water, given that debris found so far had been scattered in a relatively tight area underwater.

One of the jet's turbines was found and shipped back to a port in Jakarta on Sunday.

The incident is the first major air crash in Indonesia since 189 passengers and crew were killed in 2018 when a Lion Air Boeing 737 MAX in 2018 also plunged into the Java Sea soon after take-off from Soekarno-Hatta International Airport.

The Sriwijaya Air plane had 12 crew and 50 passengers on board, all Indonesians and including 10 children.

Distraught relatives waited in Pontianak about 740km from Jakarta for news of their loved ones. At Jakarta's main airport a crisis centre was set up for families.

"We feel powerless, we can only wait and hope to get any information soon," Irfansyah Riyanto, who had five relatives on the flight, told reporters.

Tracking service Flightradar24 said the aircraft took off at 2.36 pm (local time) and climbed to reach 10,900 feet within four minutes. It then began a steep descent and stopped transmitting data 21 seconds later.

There were no immediate clues on what caused the sudden descent. Most air accidents are caused by a cocktail of factors that can take months to establish, safety experts say.

A transport ministry spokeswoman said air traffic control had asked the pilot why the plane was heading northwest instead of on its expected flight path seconds before it disappeared.

The pilots had decades of experience between them with the flight captain reported to be a former air force pilot and his co-pilot at Sriwijaya Air since 2013, according to his Linkedin profile.

The Sriwijaya Air plane was a nearly 27-year-old Boeing 737-500, much older than Boeing's problem-plagued 737 MAX model. Older 737 models are widely flown and do not have the stall-prevention system implicated in the MAX safety crisis.

"We are in contact with our airline customer and stand ready to support them during this difficult time," Boeing said in a statement. "Our thoughts are with the crew, passengers, and their families."

Founded in 2003, Jakarta-based Sriwijaya Air group flies largely within Indonesia's sprawling archipelago. The budget airline has had a solid safety record, with no onboard casualties in four incidents recorded on the Aviation Safety Network database.

In 2007, the European Union banned all Indonesian airlines following a series of crashes and reports of deteriorating oversight and maintenance since deregulation in the late 1990s. The restrictions were fully lifted in 2018.