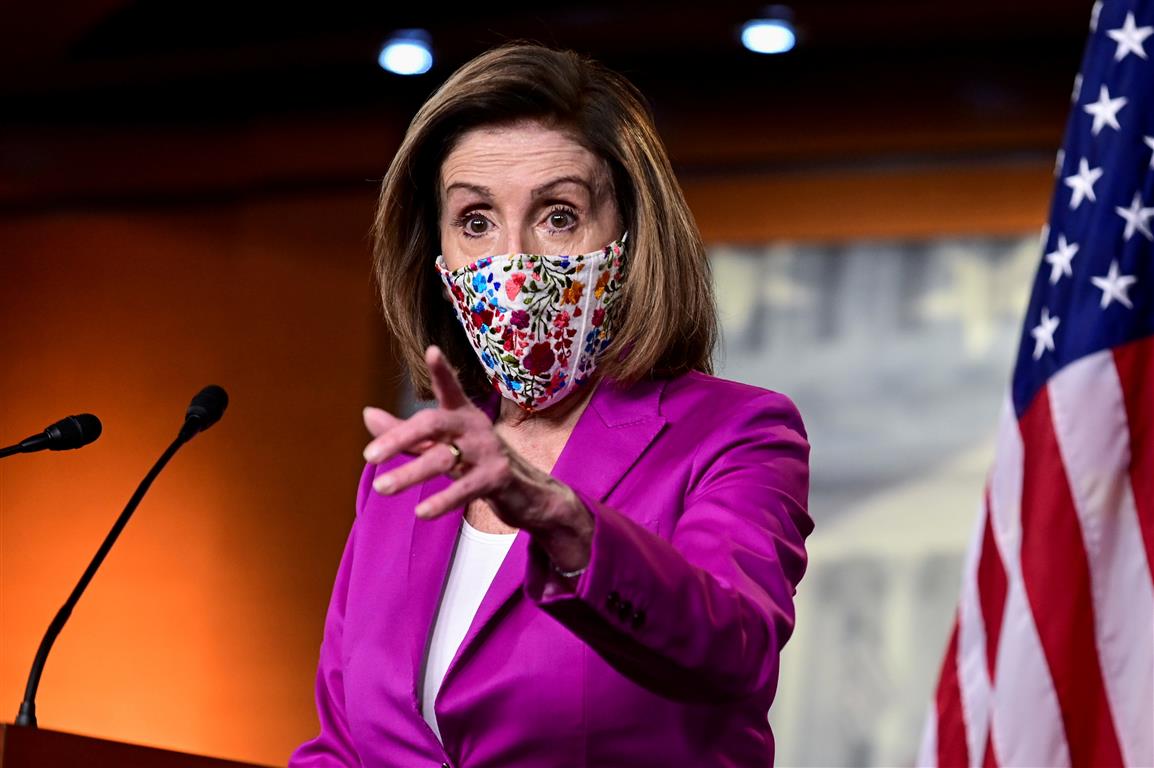 Nancy Pelosi speaks to reporters during a news conference in Washington last week. Photo: Reuters
US House of Representatives Democrats plan a vote on Monday to urge Vice President Mike Pence to take steps to remove President Donald Trump from office after his supporters' deadly storming of the Capitol, before attempting to impeach him again.

The plan, spelled out by House Speaker Nancy Pelosi in a letter to members on Sunday evening (local time), came as Washington struggles to decide what to do about Trump in the 10 days before Democratic President-elect Joe Biden is sworn in on January 20.

Officials have opened at least 25 domestic terrorism investigations into Wednesday's assault on the US Capitol, a top military officer told lawmakers, according to a House Democrat. Five people died in the rampage through the seat of government by Trump's backers after a fiery speech denouncing the November 3 election results by the Republican president.

Prosecutors have filed dozens of cases related to the attacks in federal and local courts. The FBI confirmed late on Sunday it had received over 40,000 digital media tips, including video and photos, from the public in connection with violence at the Capitol on January 6.

Trump, who has without evidence challenged the validity of Biden's election victory, praised and egged on supporters before they laid siege to the Capitol, where lawmakers were certifying the Electoral College vote for Biden.

Lawmakers were forced to flee, as the building was mobbed by Trump supporters - wearing hats with his slogan and waving flags with his name - who overwhelmed security forces.

The five dead included one Capitol Police officer beaten as he tried to ward off the crowds. Another police officer involved in the building's defence died while off duty in the days following the attack, officials said.

In her letter, Pelosi said leaders of the Democratic-led House would attempt on Monday to pass a resolution calling on Pence to activate the 25th Amendment of the Constitution to declare Trump incapable of fulfilling the duties of his office.

If Pence does not respond, Democrats would proceed with impeaching the president for a historic second time.

"In protecting our Constitution and our Democracy, we will act with urgency, because this President represents an imminent threat to both," Pelosi said in the letter.

"As the days go by, the horror of the ongoing assault on our democracy perpetrated by this President is intensified and so is the immediate need for action," she wrote.

Pelosi and other Democrats have been expressing increasing concern about Trump. On Friday, Pelosi said she spoke to the top US military commander about taking precautions to ensure an "unhinged" Trump cannot initiate hostilities or order a nuclear strike before leaving office.

Aides to House Republican leader Kevin McCarthy did not immediately respond to a request for comment. McCarthy on Friday rejected the idea of impeaching Trump, saying it would only compound divisions within the United States.

There was support among some Republicans, however, for Trump's removal. Senator Pat Toomey, a conservative backer of Trump until recently, told NBC that Trump's resignation "as soon as possible" would be best for the country.

Toomey said he did not think impeachment was viable with only 10 days left in Trump's term, and noted there did not appear to be a consensus to use the 25th Amendment to strip Trump of his powers.

He told CNN he believed Trump could be held criminally liable in the events at the Capitol.

Trump's last public event was his speech to the rally of his supporters on Wednesday, although he released a video on Thursday that some at the White House saw as a concession. He later announced on Twitter that he would not attend Biden's inauguration.

Trump, as part of an effort to highlight his accomplishments in office, planned to leave Washington to visit the border community of Alamo, Texas, on Tuesday. Trump has made a hard line against immigration and construction of a wall on the border with Mexico focuses of his presidency.

Biden has said he will leave the impeachment question to Congress. He did say Congress must be able to hit the ground running once he takes office, when he will focus on the coronavirus pandemic and economic recovery.

Senate Democratic leader Chuck Schumer, who will become majority leader after Biden and Vice President-elect Kamala Harris are inaugurated and the two new Democratic senators from Georgia take their seats, said on Sunday that the threat from violent extremist groups remained high.

After the violence, which followed months of posts by Trump and his supporters attacking the US election process, Twitter permanently suspended Trump, who relied on it as one of his most direct ways to communicate with backers.