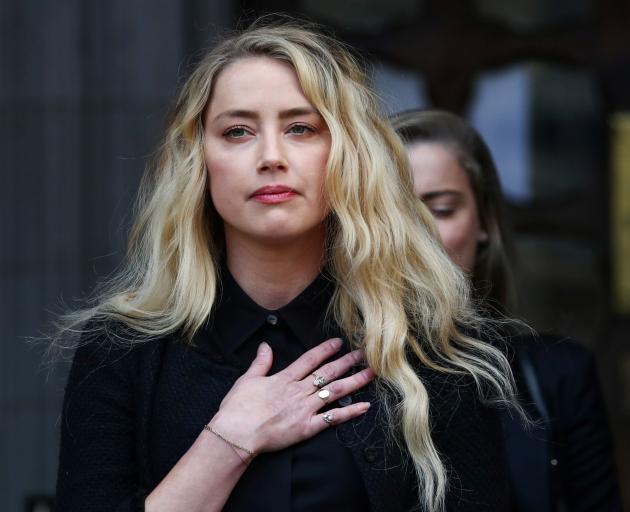 Amber Heard speaks to reporters outside court on Tuesday. Photo: Reuters
Johnny Depp was the victim of invented allegations and physical violence from his former wife Amber Heard, London's High Court has been told on the final day of the Hollywood actor's three-week libel suit against a British tabloid.

Pirates of the Caribbean star Depp is suing News Group Newspapers, publishers of the Sun, and one of its journalists, Dan Wootton, over a 2018 article that called him a "wife beater". 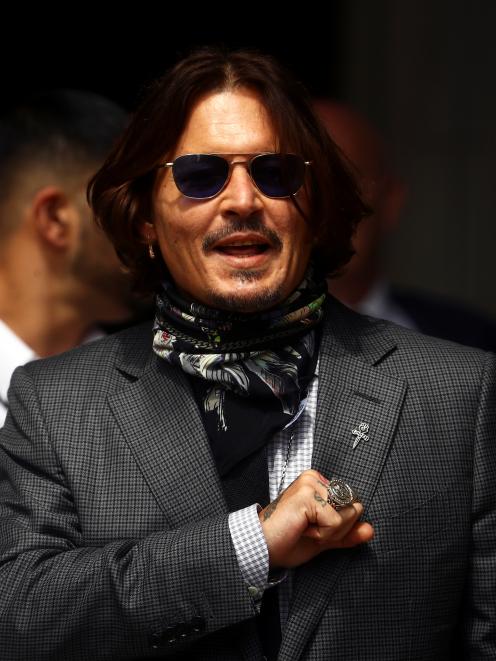 Johnny Depp acknowledges fans outside the court. Photo: Reuters
Depp (57) and Heard (34) both gave evidence at the trial. Depp said he had never been violent towards Heard or any other woman and that she was the one who had attacked him.

Heard said Depp assaulted her on at least 14 occasions, including punching, head-butting and throttling her, and on Monday her lawyer said Depp was "a hopeless addict".

In his closing speech on Tuesday, Depp's lawyer David Sherborne said while Depp had been open about his use of drugs and alcohol, Heard had played down her own consumption of them as well as her anger and jealousy issues.

"She is the abuser, not Mr Depp. He is no wife beater," Sherborne told the court.

He said Heard was a "wholly unreliable witness and, frankly, compulsive liar" who had tailored her story to meet the evidence produced against her and lied about injuries she said she had suffered.

A recording was played to the court in which Depp tells Heard she is lying when she says she did not punch him, which Sherborne said demonstrated Heard's "propensity to violence".

"Don't tell me what it feels like to be punched," Depp said in the recording, before Heard retorts: "I hit you like this. But I did not punch you."

Sherborne said the admission that Heard hit Depp would have caused "consternation" if the roles were reversed.

In his testimony, Depp said he modelled himself as a "Southern gentleman" who would never strike a woman.

"He has never hit a woman in his entire life. Period, full stop, nada," Sherborne said.

He said the Sun's article was "not researched at all" and presented in a one-sided manner, effectively convicting Depp of a crime he had never committed.

'DON'T BE THE MONSTER'

Sherborne said texts from Depp highlighted by Heard's lawyer for their violent and misogynistic language had been chosen selectively, and they should not be taken as testimony.

"The exaggerated texts ... should not be taken literally," he said. "He may use poetic licence, he may use metaphor, but he never ever says that he hit Miss Heard."

Depp had been candid about his drug and alcohol intake, Sherborne said, but denied they unleashed a "monster" in Depp.

Instead, Sherborne quoted messages between Heard and Depp where the "monster" referred to Depp when he was keeping away from Heard.

"I won't allow myself to be in such unstable, volatile and capricious conditions," Depp said in reply.

"I won't stand there and allow you to take pot shots at my face."

Sherborne said the allegation that Depp had an evil alter ego, as in Dr Jekyll and Mr Hyde, was false.

"I don't know any version of that myth which involves the monster running away from the fight," he said.

Heard gave a statement outside the court, saying it had been painful to relive the break-up and have her truth and motives questioned.

"I stand by my testimony, and I now place my faith in British justice," she said.

A date for the ruling was not given.