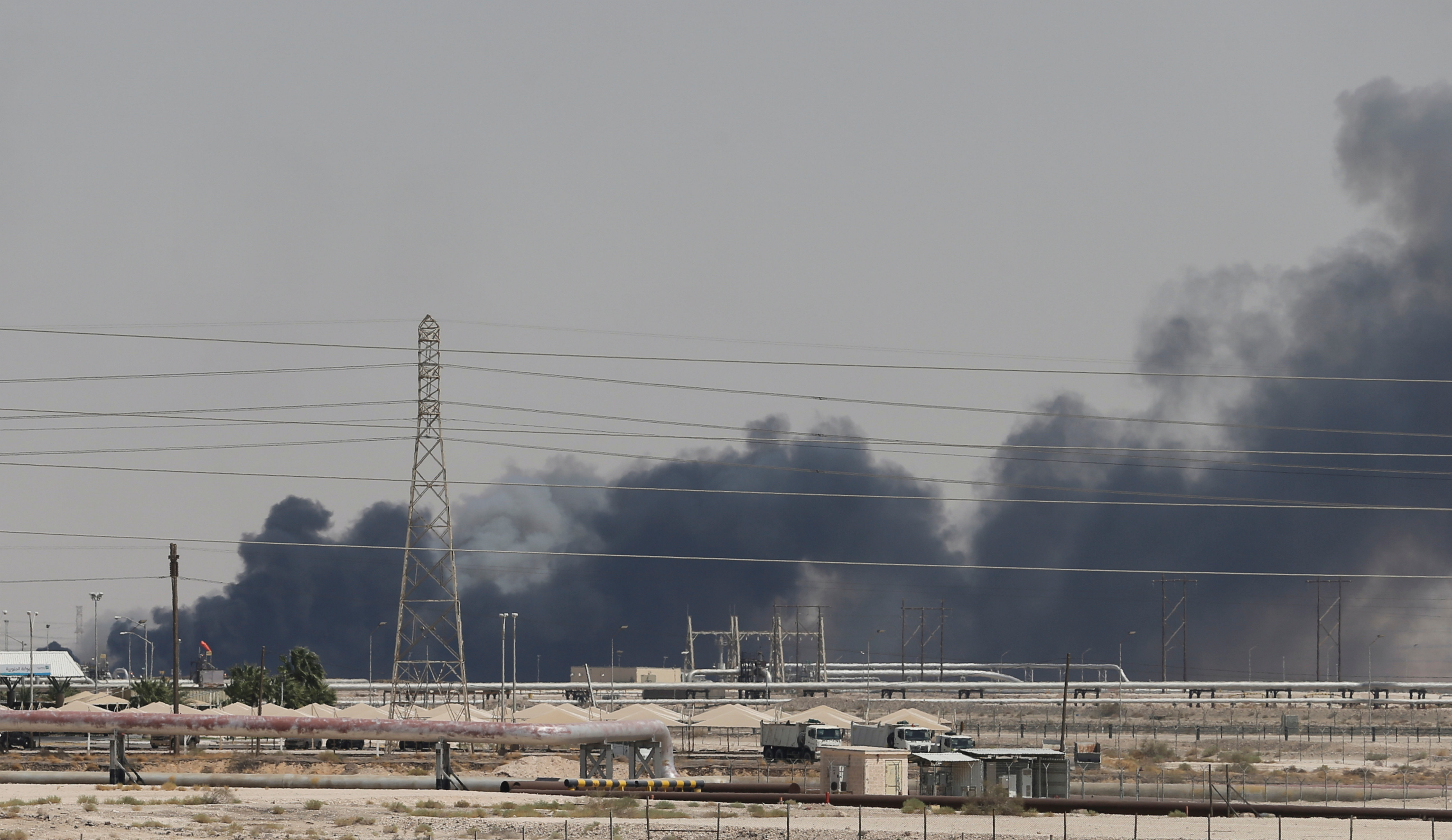 The Aramco facility in Abqaiq was targeted. The oil processing plant handles crude from the world's largest conventional oilfield, the supergiant Ghawar. Photo; Reuters
Yemen's Iran-aligned Houthi group says it attacked two plants at the heart of Saudi Arabia's oil industry on Saturday, knocking out more than half the Kingdom's output, in a move expected to send oil prices soaring and increase tensions in the Middle East.

The attacks will cut the kingdom's output by 5.7 million barrels per day (bpd), according to a statement from state-run oil company Saudi Aramco, or more than 5% of global oil supply.

The pre-dawn strikes follow earlier cross-border attacks on Saudi oil installations and on oil tankers in Gulf waters, but these were the most brazen yet, temporarily crippling much of the nation's production capacity.

Saudi Arabia is the world's biggest exporter, shipping more than 7 million barrels of oil to global destinations every day, and for years has served as the supplier of last resort to markets.

While the Houthis claimed responsibility for the attack, US Secretary of State Mike Pompeo put the blame squarely on Iran, writing on Twitter that there was "no evidence the attacks came from Yemen."

"Amid all the calls for de-escalation, Iran has now launched an unprecedented attack on the world's energy supply," Pompeo said.

State television said exports were continuing but Aramco has yet to comment since the assault, which the Houthis said was carried out by 10 drones.

"For now, markets are well supplied with ample commercial stocks," the International Energy Agency tweeted, saying it was in contact with Saudi authorities as well as major producer and consumer nations.

The attacks occurred as Aramco accelerates plans for an initial public offering of the state oil giant to as early as this year, and follow earlier cross-border attacks on Saudi oil installations and on oil tankers in Gulf waters.

Saturday's attacks appeared to be the most brazen yet.

Saudi de facto ruler Crown Prince Mohammed bin Salman told U.S. President Donald Trump by telephone that Riyadh had the will and capability "to confront and deal with this terrorist aggression," according to Saudi state news agency SPA.

The United States condemned the attacks and Trump told the crown prince that Washington was ready to work with the kingdom to guarantee its security, according to the White House.

The US Department of Energy also said it was ready to release oil from its strategic petroleum reserve if necessary. Energy Secretary Rick Perry also said his department would work with the International Energy Agency, which coordinates energy policies of industrialised nations, if global action is needed.

Saudi Arabia, leading a Sunni Muslim coalition that intervened in Yemen in 2015 against the Houthis, has blamed regional rival Shi'ite Iran for previous attacks, which Tehran denies. Riyadh accuses Iran of arming the Houthis, a charge denied by the group and Tehran.

Coalition spokesman Colonel Turki al-Malki said an investigation had been launched into who planned and executed the strikes. He said the Western-backed alliance would counter threats to global energy security and economic stability.

Aramco Chief Executive Amin Nasser said there were no casualties from the attacks.

Saudi Energy Minister Prince Abdulaziz bin Salman said Aramco would have more information within 48 hours, and it will draw down oil in storage to compensate for the loss. Aramco is in the process of planning what is expected to be the world's largest initial public offering.

"Abqaiq is perhaps the most critical facility in the world for oil supply," said Jason Bordoff, who runs the Center On Global Energy Policy at Columbia University and served on the US National Security Council during Barack Obama's presidency.

"The risk of tit-for-tat regional escalation that pushes oil prices even higher has just gone up significantly."

Many Western employees of Aramco live in Abqaiq. The US Embassy in Riyadh said it was unaware of any injuries to Americans from the attacks.

"These attacks against critical infrastructure endanger civilians, are unacceptable, and sooner or later will result in innocent lives being lost,” the embassy quoted Ambassador John Abizaid as saying in a Twitter post.

It was the latest in a series of Houthi missile and drone strikes on Saudi cities that had largely been intercepted, but have recently hit targets, including Shaybah oilfield last month and oil pumping stations in May. Both those attacks caused fires but did not disrupt production.

"This is a relatively new situation for the Saudis. For the longest time they have never had any real fears that their oil facilities would be struck from the air," Kamran Bokhari, founding director of the Washington-based Center for Global Policy, told Reuters.

He said Riyadh had in the past largely protected oil assets against vehicle-borne explosive attacks by militant groups.

Aramco's chief executive said in a statement that the situation had been brought under control. A Reuters witness said the fire in Abqaiq appeared to have been extinguished by early evening.

Regional tensions have escalated after Washington quit an international nuclear deal and extended sanctions on Iran.

The violence is complicating UN-led peace efforts to end the Yemen war which has killed tens of thousands and pushed millions to the brink of famine. The conflict is widely seen as a proxy war between Saudi Arabia and Iran.

The coalition intervened in Yemen after the internationally recognised government was ousted from power in Sanaa by the Houthis, who say they are fighting a corrupt system.

The Houthis' military spokesman, without providing evidence, said drones hit refineries at both Saudi sites, which are more than 1000 km from the Yemeni capital Sanaa, and pledged a widening of assaults against Saudi Arabia.