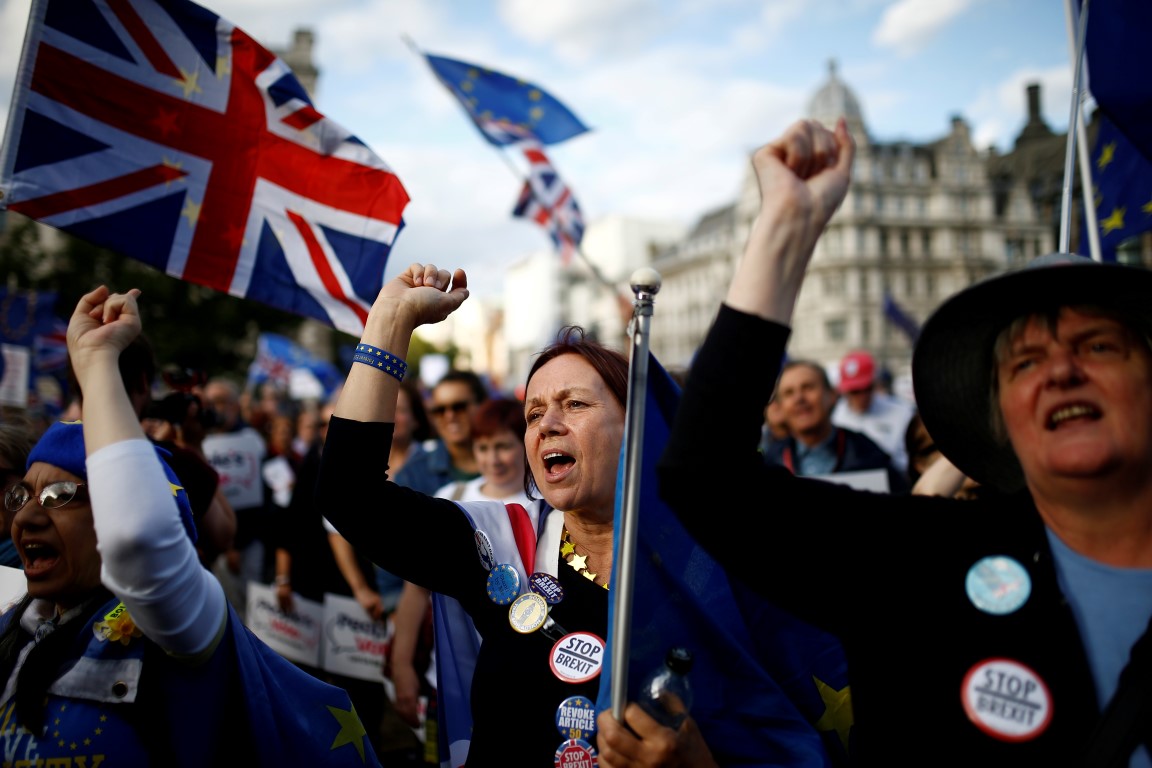 Anti-Brexit protesters outside the Houses of Parliament in London earlier this month. Photo: Reuters
The British government's plans for a no-deal Brexit warn of severe disruption to cross-Channel routes, affecting the supply of medicines and certain types of fresh foods, and say that protests and counter-protests will take place across the country, accompanied by a possible rise in public disorder.

The "Operation Yellowhammer" worst-case assumptions published on Wednesday (local time) were prepared on August 2, the government said, nine days after Boris Johnson became prime minister, and form the basis of its no-deal planning.

The document, which looks at the worst that could happen if Britain leaves the European Union on October 31 without a deal, said public and business readiness for such an outcome would likely be low, in part because of continued political confusion in the run-up to Brexit day.

It said lorries could have to wait up to two and a half days to cross the English Channel and British citizens could be subject to increased immigration checks at EU border posts.

"Certain types of fresh food supply will decrease," it said. "There is a risk that panic buying will cause or exacerbate food supply disruption."

It said the flow of traffic across the English channel could be reduced by as much as 60% on the first day after a no-deal Brexit. The worst disruption could last for up to three months.

Traffic queues could affect fuel deliveries, disrupting supplies in London and south-east England, and panic buying could cause shortages in other parts of the country, it said.

Cross-border financial services would be affected as would information-sharing between police and security services, according to the document.

Documents from Operation Yellowhammer were first published in the Sunday Times newspaper on Aug. 18.

Michael Gove, the minister in charge of coordinating "no-deal" preparations, said then that the document was old and did not reflect current levels of preparedness.

He said on Wednesday that assumptions contained in the five-page published document were currently being reviewed, but they were the most recent complete iteration of the plans.

The opposition Labour Party said the document confirmed the severe risks of a no-deal Brexit.

"It is completely irresponsible for the government to have tried to ignore these stark warnings and prevent the public from seeing the evidence," said Labour's Brexit spokesman Keir Starmer.

"Boris Johnson must now admit that he has been dishonest with the British people about the consequence of a No Deal Brexit."

In releasing the document, Gove was acceding to a request from lawmakers. But he refused to make public the advice of government advisers about Johnson's decision to prorogue, or suspend, parliament from Monday until Oct. 14.

Scotland's highest court of appeal ruled that decision was unlawful on Wednesday, prompting calls for lawmakers to return to work.

Gove said the publication of advice given to ministers would be an "inappropriate and disproportionate" use of parliamentary procedure, and the individuals would have no right to reply.