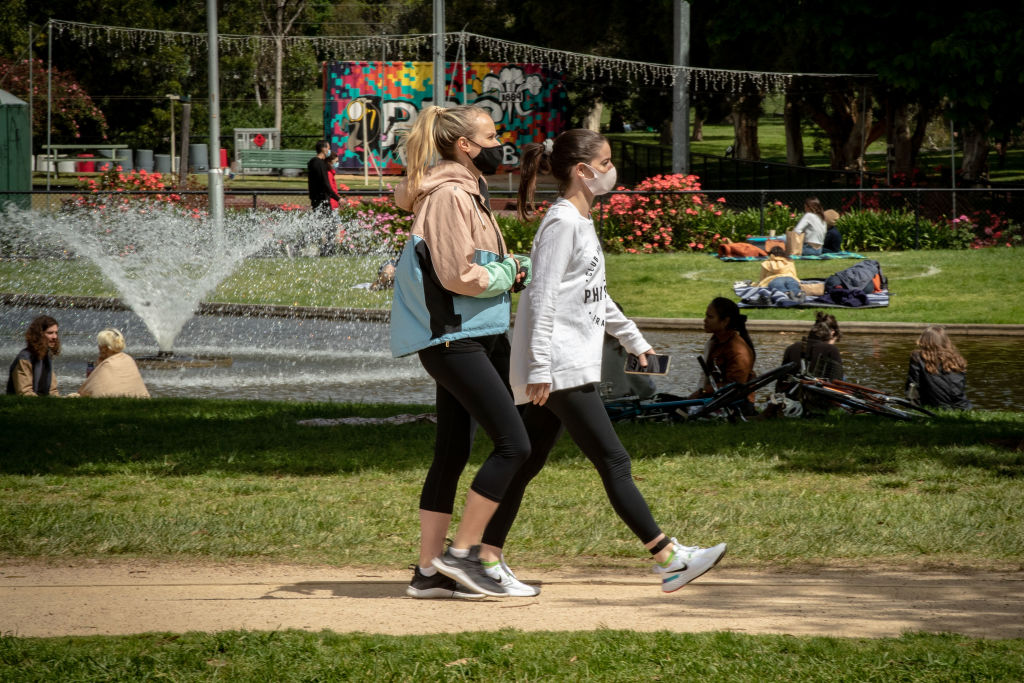 People in Melbourne's Princes Park yesterday. Photo: Getty
The Australian state of Victoria reported four new Covid-19 cases on Monday as people in Melbourne were granted more freedom to move about after a months-long lockdown, buoying hopes an outbreak in the city was nearing an end.

Case numbers were up from just two on Sunday, but extended a run of single-digit daily increases to almost a week and is well down from a peak of more than 700 cases in a single day in early August.

After more than 100 days in a strict lockdown that allowed only for two hours of outdoor activity a day, the 5 million people living in Melbourne, Victoria's capital, will be able to spend as much time exercising outdoors as they wish.

However, many are unhappy that the hospitality and retail industries have been left out.

From Monday, Melburnians will be allowed to travel 25km from home and there will be no limit on time spent outdoors.

Outdoor gatherings will also increase from five people to 10 from two households, while facilities such as skate parks, golf courses and tennis courts will reopen.

Melburnians will also be able to get a haircut, see an allied health professional, renovate their home, wash their car and bid at an auction, though a number of strict safety protocols will be in place.

"I have announced today what is safe but will not undermine the sacrifice, the hard work, the pain, the amazing efforts that Victorians have put in," Mr Andrews told reporters on Sunday.

In regional Victoria, up to two people plus dependents will be allowed to visit homes once a day, while hospitality venues can increase their capacity to 70 people outside and 40 people inside.

The "ring of steel" that separates metropolitan Melbourne from regional Victoria will remain in place.

Melbourne will take another step on November 2, with hospitality venues be able to seat 50 people outside and 20 people inside, while retail and beauty and personal care services can resume.

People will be allowed to host a maximum of two people plus dependents at their homes once a day.

Mr Andrews, however, indicated the next step could be brought forward, depending on case numbers across Victoria in the next week.

But many industry groups are not impressed.

Business Council of Australia chief executive Jennifer Westacott said it was an "an inexplicable and unacceptable delay".

"There is no sound reason to continue the restrictions on business, especially with case numbers clearly on a downward trajectory," she said in a statement.

"There is still no long-term coherent plan to rebuild a shattered Victorian economy," Mr Piper said.

The nation's economy shrank 7% in the three months to the end of June, the biggest quarterly shrinkage since records began in 1959.

The unemployment rate hit a 22-year high of 7.5% in July as businesses and borders closed to deal with the coronavirus.

Australia has recorded just over 27,300 Covid-19 infections, according to health ministry data, far fewer than many other developed countries.

Victoria accounts for more than 90% of the 905 deaths nationally. The state's death toll from the virus 816 and the national figure is 904.