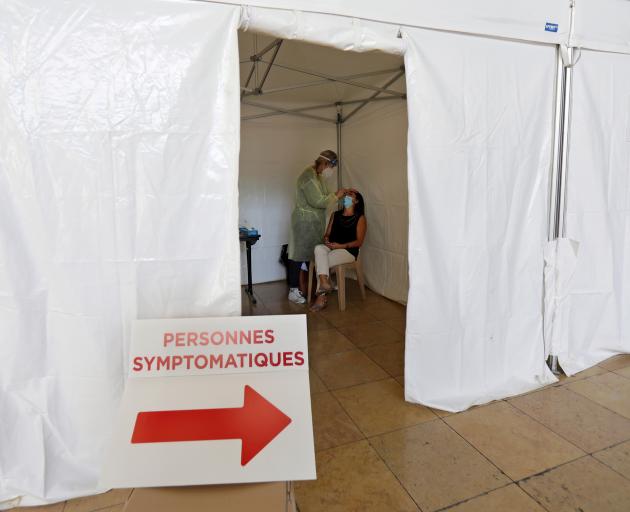 A medical worker, wearing protective suit and face mask, administers a nasal swab to a patient in a testing site in Nice this week. Photo: Reuters
France has recorded almost 10,000 new Covid-19 infections - its highest ever single-day total - a day before a cabinet meeting that might consider imposing fresh, local lockdowns to curb the spread of the disease.

Since the beginning of the month, new cases have gone up by 7292 each day on average, a figure that blows away the previous record daily average of 3003 seen in August.

After reaching a low of 4530 on August 28, the number of people hospitalised with Covid-19 is again trending upward, with an increase of 93 over the last 24 hours to 5096, the highest total in more than a month.

That figure has now shot up for 12 days in a row. The number of patients in intensive care units stands at 615, a level unseen since the end of June.

Hospital figures are still very far from peaks reached in April but create renewed strain on the hospital system that might lead authorities to take action.

France's decision to put the country under one of Europe's strictest lockdowns between March 17 and May 11 was dictated by the need to keep the hospital system from being overwhelmed.

Government spokesman Gabriel Attal said earlier in the day that nothing would be ruled out at Friday's cabinet meeting, while President Emmanuel Macron said he hoped any new measures would not be too restrictive.

The number of people in France who have died from Covid-19 infections increased by 19, to 30,813. Thursday's figure is lower than the 30+ figure reported in the previous two days but still above the seven-day moving average of 15.

France has the seventh-highest Covid-19 death toll in the world.