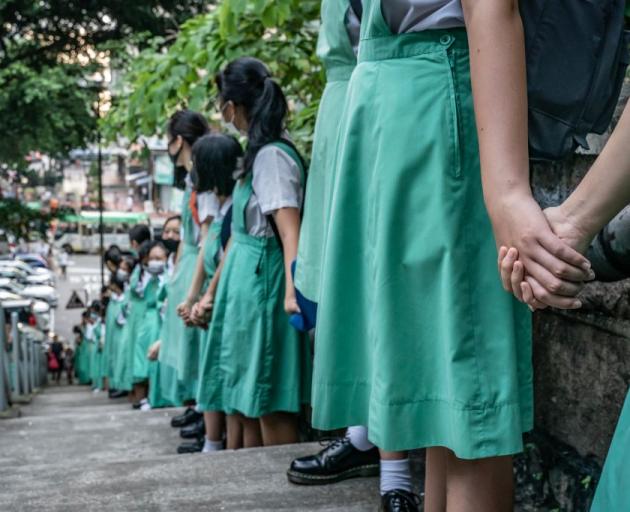 Children join hands to form part of a human chain after weeks of violence in Hong Kong. Photo: Getty Images
Hundreds of secondary school students, many wearing masks with their uniforms, formed human chains in districts across Hong Kong on Monday in support of anti-government protesters after another weekend of clashes in the Chinese-ruled city.

Metro stations which had closed on Sunday amid sometimes violent confrontations reopened, although the mood in the Asian financial hub remained tense.

The Hong Kong government warned foreign lawmakers not to interfere in the internal affairs of the former British colony after thousands of protesters called on US President Donald Trump to "liberate" the city.

Chinese state media said Hong Kong was an inseparable part of China and any form of secessionism "will be crushed".

The China Daily newspaper said Sunday's rally was proof foreign forces were behind the protests and warned demonstrators should "stop trying the patience of the central government".

"Hong Kong is an inseparable part of China - and that is the bottom line no one should challenge, not the demonstrators, not the foreign forces playing their dirty games," the China Daily said in an editorial.

"The demonstrations in Hong Kong are not about rights or democracy. They are a result of foreign interference. Lest the central government's restraint be misconstrued as weakness, let it be clear secessionism in any form will be crushed," it said.

State news agency Xinhua said in a separate commentary that the rule of law needed to be manifested and that Hong Kong could pay a larger and heavier penalty should the current situation continue.

Three months of protests over a now withdrawn a hugely unpopular extradition bill that would have allowed suspects to be tried in Communist Party-controlled courts in China.  Lam formally scrapped the bill last week as part of concessions aimed at ending the protests.

But the protests have evolved into a broader backlash against the government. Many activists are angry over Hong Kong leader Carrie Lam's refusal to grant an independent inquiry into accusations of police brutality during demonstrations.

The protesters' other demands include the retraction of the word "riot" to describe demonstrations, the release of all those arrested and the right for Hong Kong people to choose their own leaders.

Joshua Wong, one of the leaders of the pro-democracy "Umbrella" movement five years ago, was due to appear in court on Monday for breaching bail conditions following his arrest in August when he was charged with inciting and participating in an unauthorised assembly.

Hong Kong returned to China in 1997 under a "one country, two systems" formula that guarantees freedoms not enjoyed on the mainland. Many Hong Kong residents fear Beijing is eroding that autonomy.

China denies the accusation of meddling and says Hong Kong is an internal affair. It has denounced the protests, accusing the United States and Britain of fomenting unrest, and warned of the damage to the economy.

“The United States continues to monitor events in Hong Kong," said a senior US official, speaking on condition of anonymity.

"The freedoms of expression and assembly are core values that we share with the people of Hong Kong, and those freedoms must be vigorously protected. As the President has said: ‘they’re looking for democracy and I think most people want democracy’.”