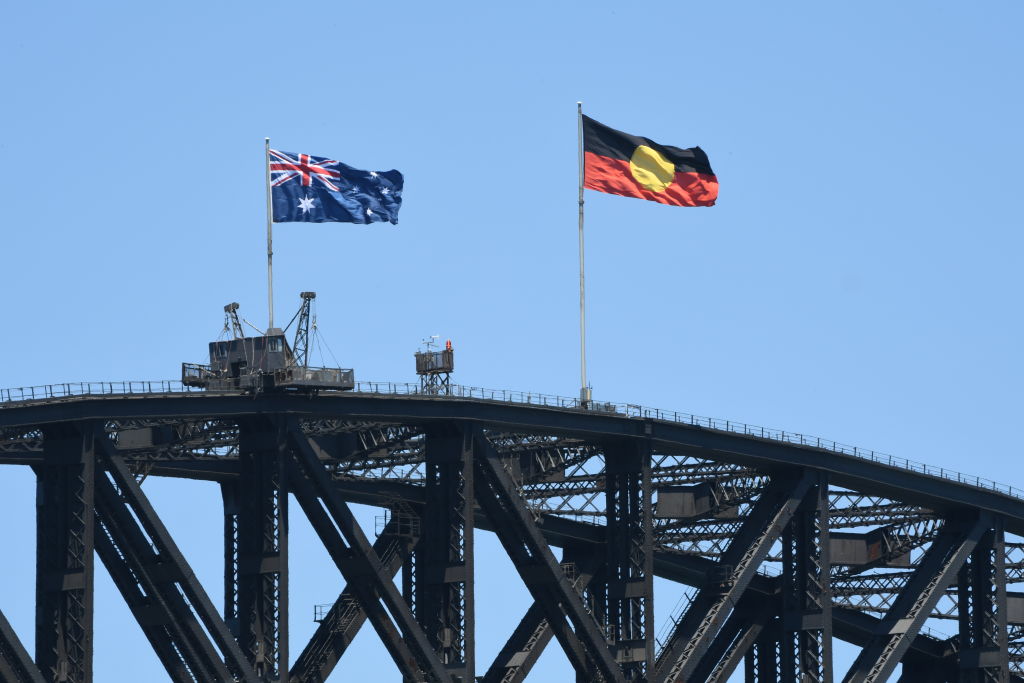 The flag is often flown on on the bridge for days of Aboriginal significance, such as pictured on National Australian Indigenous Day of Celebration in November 2020, but will now fly there permanently. Photo: Getty Images
The Aboriginal flag will fly permanently on the Sydney Harbour Bridge as part of a "healing process" and reconciliation efforts with Australia's indigenous community, New South Wales Premier Dominic Perrottet says.

The distinctive black, red and yellow flag will fly alongside the Australian flag and New South Wales state flag at the top of the landmark bridge.

The Aboriginal flag, recognised as an official flag of Australia since 1995, is flown from government buildings and embraced by sporting clubs and athletes of Aboriginal heritage.

The government of Australia's most populous state said it would spend $A25 million ($NZ27.5 million) to permanently install a third flagpole on the bridge by the end of the year to fly the flag.

Perrottet said on Sunday the move represented a continuation of "the healing process as part of the broader move towards reconciliation", efforts that seek to promote better ties between the wider Australian community and Aboriginal and Torres Strait Islander peoples.

"It's an important decision that we've made, I think it brings unity to our country and it's a small price to pay for that unification," he told reporters in Sydney.

The federal government this year acquired copyright to the Aboriginal flag so it could be freely used, resolving a commercial dispute that had limited sporting teams and Aboriginal communities from reproducing the image.

The flag's colours represent the Aboriginal people and their spiritual connection to the land. It was first raised in 1971 at a land rights rally in the state of Victoria.