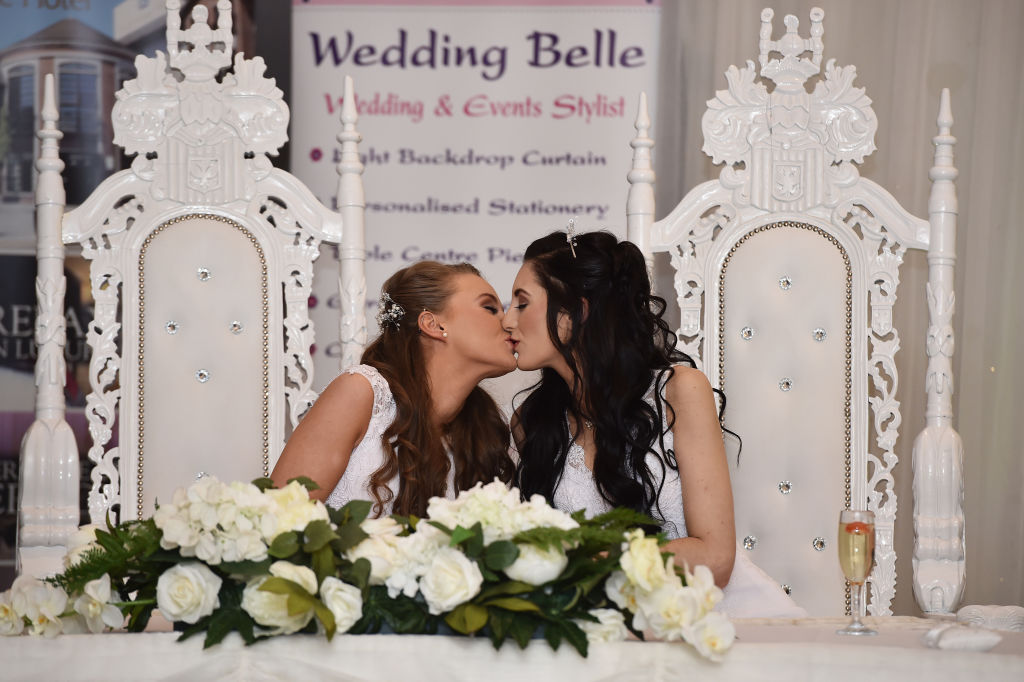 Robyn Peoples, 26, a healthcare worker from the city, and Sharni Edwards, 27, a waitress originally from Brighton, became the province's first gay couple to wed, according to the Love Equality campaign group.

The women exchanged their vows in Carrickfergus, County Antrim on their sixth anniversary as a couple.

"This means everything to us. Just to be married. This is my wife. I can finally say this is my wife," Peoples told reporters after the ceremony attended by around 50 friends and family.

"For Northern Ireland we need to be the faces... To show everyone it's ok. We fought so long and hard for this opportunity to be seen as equal and now we are here and it's just amazing."

The couple had been planning a civil partnership - legal across the UK since 2005 - but decided to get married instead after the landmark change came into law on Monday.

The pair - who said they will go by the titles Mrs and Mrs Edwards-Peoples - got engaged on a trip to Paris to see pop star Ariana Grande in concert.

They said their first dance will be to "Over and Over Again", a song by singer Nathan Sykes that features Grande.

Northern Ireland's prohibition on same-sex marriage was eliminated by the central government after a vote by British lawmakers when the province did not have a sitting government.

The British parliament also voted to loosen restrictions on abortion in the region at the same time.

Britain's Northern Ireland Minister Julian Smith, members of parliament and campaigners were to celebrate the legalization of gay marriage at an event in London later on Tuesday.

Sara Canning, the partner of murdered author Lyra McKee, who was shot dead by a New IRA gunman in Londonderry last year, will also attend the London event.

"It means the absolute world," Edwards said, when asked what it meant to be champions for the lesbian, gay, transsexual, bisexual and queer (LGBTQ) community in Northern Ireland, who have long campaigned for equal rights.

"If it wasn't for them guys we would not be standing here right now so we just want to say thank you to everyone who's marched, signed petitions and helped us to get to this stage."