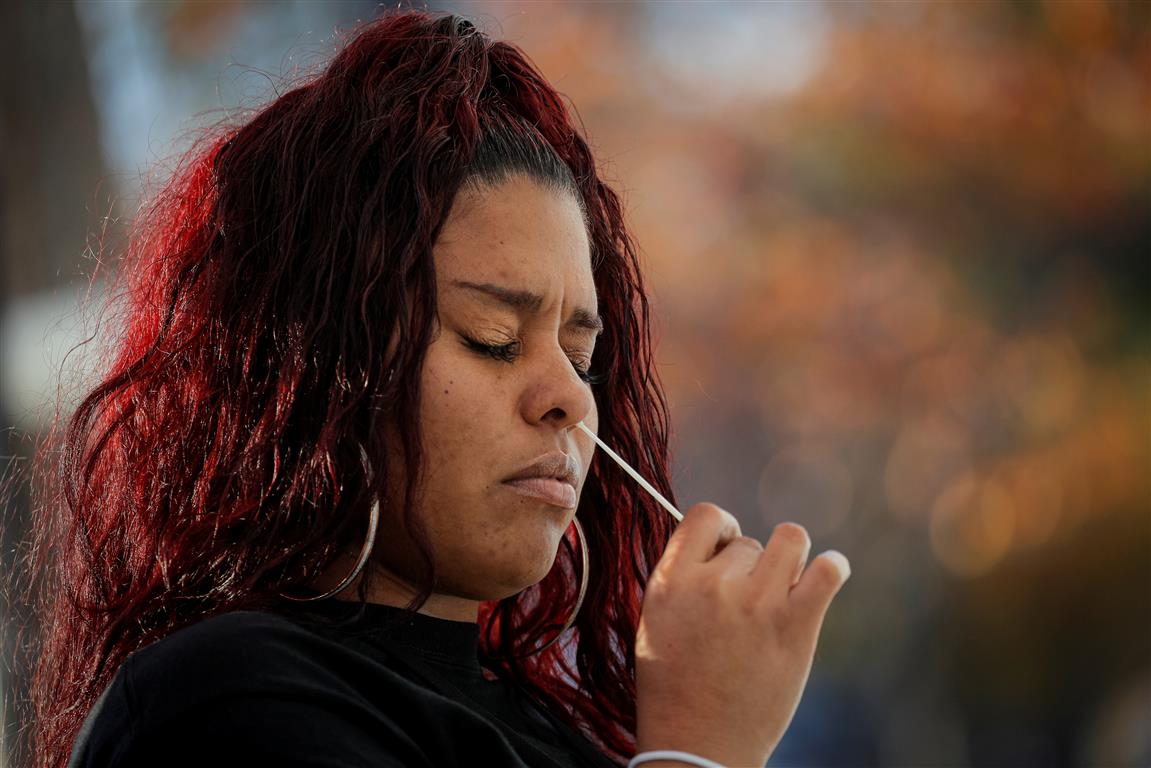 A woman takes a Covid-19 test in Staten Island, New York. Photo: Reuters
New York Governor Andrew Cuomo imposed a new round of restrictions aimed at curbing the spread of the coronavirus as the infection rate climbed and hospitalizations soared in the state that was the centre of the US outbreak in its early stages.

Cuomo ordered bars, restaurants and gyms in the state to shut down on-premises services at 10pmy, and capped the number of people who could attend private parties at 10.

"We’re seeing a national and global Covid surge, and New York is a ship on the Covid tide," the governor told reporters, adding that contact tracing identified late-night gatherings at bars, restaurants and gyms as key virus spreaders in the state.

The new measures, which take effect on Friday, came a day after California and several states across the Midwest tightened restrictions on residents to try to curb the rapid spread of the virus.

"This is our last chance to stop a second wave," New York City Mayor Bill de Blasio tweeted, as he announced the city-wide seven-day average rate of coronavirus tests coming back positive had hit 2.52%.

Our country just saw more than 61,000 COVID-19 hospitalizations in one day.

This crisis isn’t over. Not even close.

This is our last chance to stop a second wave in New York City. We know the consequences if we don’t. https://t.co/U3QGCkOjNz

The city's public school system, the nation's largest, would be shut to in-person learning if that figure reaches 3%.

As Covid-19 infections, hospitalisations and deaths surge across the United States, more signs emerged that a second wave could engulf areas of the Northeast, which had managed to bring the pandemic under control after being battered last spring.

The United States as a whole reported more than 1,450 deaths on Tuesday, the highest single-day count since mid-August, according to a Reuters analysis.

US Covid-19 cases climbed for seven consecutive days to reach more than 136,000 as of late Tuesday, while hospitalisations crossed 60,000 for the first time since the pandemic began, threatening to overwhelm systems in many parts of the country.

In New Jersey, one of the early US hotspots, a spike in cases in Newark - the state's largest city - prompted Mayor Ras Baraka to implement aggressive measures, including a mandatory curfew for certain areas.

The positivity rate in Newark hovered at 19%, more than double the state's 7.74% seven-day average, Baraka said in a statement on Tuesday. The World Health Organization has said anything over 5% is concerning.

"Stricter measures are required in the city's hotspots in order to contain the virus and limit the spread," he said.

New Jersey Governor Phil Murphy on Monday announced restrictions similar to those in New York in response to a rise in Covid-19 cases in the state, and outbreaks among bartenders.

In Maryland, where the positivity rate stood at 5.6% on Wednesday, officials warned about rising Covid-19 hospitalisations.

More than 800 people were being treated for Covid-19 at state hospitals as of Wednesday, according to Mike Ricci, the communications director of Governor Larry Hogan. That is Maryland's highest daily count since April.

A record number of people died of Covid-19 in several Midwest and western states on Tuesday, including in Alaska, Indiana, Missouri, North Dakota, Wisconsin and Wyoming.

"We are definitely seeing a rise in cases and large number of cases across the state," Dr. Chris Weaver, an emergency medicine physician and senior vice president of clinical effectiveness at Indiana University Health, told Reuters.

"We are in a good place now to manage all the patients that we have but, as volumes increase quickly, it's going to fill up everything," he added.

In Texas, officials in the county of El Paso have brought in 10 temporary refrigerated morgue trailers to contend with one of the worst Covid-19 spikes in the United States.

Officials in states hardest-hit by the virus pleaded with residents to stay home as much as possible and heed the advice of experts by wearing masks, washing their hands and social distancing.

"It's not safe to go out, it’s not safe to have others over, it's just not safe. And it might not be safe for a while yet," Wisconsin Governor Tony Evers said, as he issued new mitigation measures. "So, please, cancel the happy hours, dinner parties, sleepovers and playdates at your home."