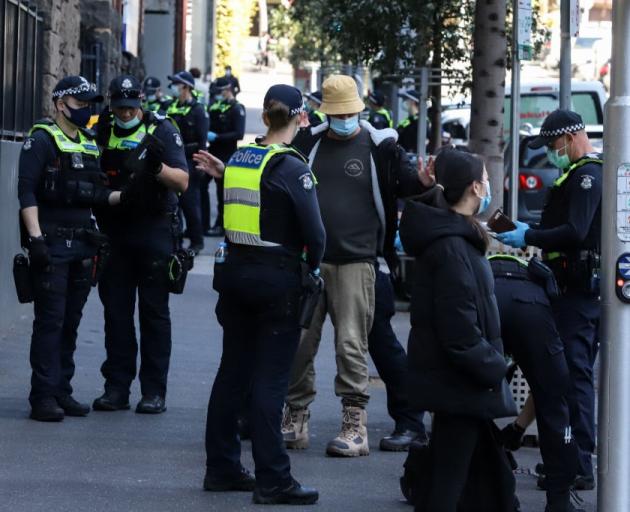 Police search a man ahead of a planned protest in Melbourne on Thursday. Photo: Getty Images
Two central Melbourne vaccination centres have closed down after staff were spat on in the ongoing protests in the Australian city.

Police prepared for a fourth day of anti-lockdown protests on Thursday after more than 200 arrests a day earlier, while Covid-19 cases across the state of Victoria hit a daily record.

Hundreds of protesters have taken to the streets in the city of 5 million since officials earlier this week ordered a two-week closure of building sites and made vaccines mandatory for construction workers to limit the spread of the virus.

"Due to a disruptive demonstration in the city, cohealth Central City and cohealth Melbourne Town Hall Vaccination centre have been forced to close for client and staff safety," cohealth tweeted on Thursday.

"We hope to be safe to open by Monday 27 September so we can continue providing health care to our city."

"Why would you abuse, why would you, as I'm told, be spitting on people who are doing that sort of work?

"That's ugly, it's uncalled for. I'm not sure whether those people can be identified, but if they can it would be my expectation that Victoria Police would deal with them."

Police used capsicum spray and foam baton rounds on Wednesday to disperse protesters who gathered at a memorial honouring war service, prompting veteran groups and some politicians to speak out against using the shrine as a rally point.

"It dishonoured those Australians who have made the ultimate sacrifice and I would hope any and all who were engaged in that disgraceful behaviour should be ashamed," Prime Minister Scott Morrison told reporters in Washington D.C. on Thursday.

Australia is fighting a third wave of infections from an outbreak of the Delta variant in its two largest cities, Sydney and Melbourne, and its capital Canberra, forcing nearly half the country's 25 million people into strict stay-at-home restrictions.

Australia's total infections topped 90,000, with some 60,000 recorded since mid-June when the first Delta case was detected in Sydney. Total deaths are just below 1200, but still lower than in many other comparable countries.