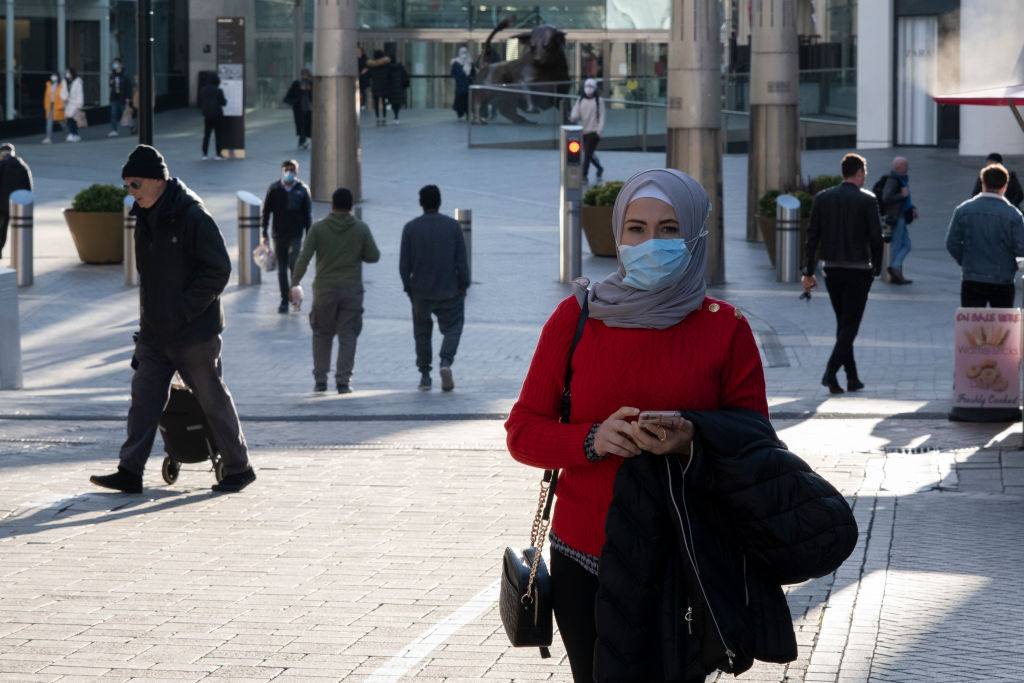 People wearing face masks in the Bull Ring shopping area of Birmingham on the day it was announced that the city would be placed in tier three of the country's coronavirus tier system. Photo: Getty
More than 20 million people across large swathes of England will be forced to live under the toughest category of Covid-19 restrictions when a national lockdown ends on December 2, while London was placed in the "high alert" second-toughest tier.

Health minister Matt Hancock on Thursday (local time) announced final details of a regional system set to take effect when blanket restrictions on England's 55 million population end after a month-long lockdown - dictating the terms of daily life for the country's citizens and businesses.

"Hope is on the horizon but we still have further to go so we must all dig deep. The end is in sight, we mustn't give up now," Hancock told parliament, alluding to growing prospects for a vaccine against the coronavirus in the coming months.

Britain has Europe's highest official death toll from the Covid-19 pandemic and has been hit hard by a second wave. The government's response on lockdown rules, procurement and testing has been criticised as disjointed, expensive and slow.

"We must follow these new rules and make sure that our actions today will save lives in future and help get our country through this," Hancock said.

Thursday's decision had been keenly awaited by businesses across the country whose ability to trade in the critical pre-Christmas period will be affected. Hospitality is one of the large sectors that will suffer the most in higher tiers.

Hancock said cases were rising in parts of the capital and needed to be brought under control.

London will be in tier 2; it was also in tier 2 before the national lockdown was imposed, although a tighter set of rules for each tier was announced earlier this week.

For London, this means no mixing of households indoors and a maximum of six people permitted to meet outdoors, hospitality venues can only offer alcohol alongside a substantial meal, and attendance will be tightly limited at sporting events.

"Many businesses across London and the Square Mile will be breathing a collective sigh of relief now that they will be able to trade in the run up to Christmas," said City of London Corporation Policy Chairwoman Catherine McGuinness.

However, some large regions of England, including the northern city of Manchester and the prosperous southeastern county of Kent, were placed in tier 3, the most restrictive, where the rate of infection is highest.

In tier 3, hospitality venues must remain closed, except for takeaway services.

"This will cause real hardship for people whose jobs will be affected and risk the loss of many businesses," Mayor of Greater Manchester Andy Burnham said.

The decisions have been made according to five criteria, including the pressure on health services in each region and the rate of change in positive coronavirus cases.

The announcement angered some local and regional politicians in the hardest hit areas, goading a rebellious core within the ruling Conservative Party who feel the government is overreacting and unjustifiably restricting daily life.

"The authoritarianism at work today is truly appalling. But is it necessary and proportionate to the threat from this disease?" Conservative lawmaker said on Twitter, demanding the government publish their evidence.

Only three regions in England were placed in the lowest tier 1 category: the Isle of Wight, Cornwall and the Isles of Scilly - all far removed from more heavily populated metropolitan areas of the country.

Tiers will be reviewed on December 16, making it possible for areas that slow the spread of the virus to be moved down a notch before Christmas.