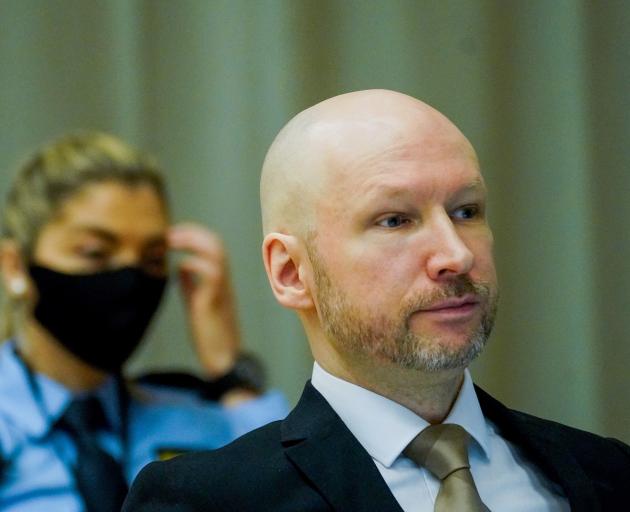 Mass killer Anders Behring Breivik is serving Norway's maximum sentence of 21 years, which can be extended indefinitely if he is deemed a continued threat to society. Photo: Ole Berg-Rusten/NTB/via Reuters
Mass murderer Anders Behring Breivik gave a Nazi salute as he arrived in court for a parole hearing that will decide if he should be released after spending more than a decade behind bars.

Breivik, a far-right extremist, killed 77 people in Norway's worst peacetime atrocity in July 2011. He killed eight with a car bomb in Oslo and then gunned down 69, most of them teenagers, at a Labour Party youth camp.

With a shaven head and dressed in a dark suit, Breivik (42) made a white supremacist sign with his fingers before raising his right arm in a Nazi salute to signal his far-right ideology as he entered the court on Tuesday.

He also carried signs, printed in English, including one that said "Stop your genocide against our white nations" and "Nazi-Civil-War".

He was later told to stop displaying them as the prosecution presented its case.

"I don't want to see anything of the kind when the prosecution speaks," Judge Dag Bjoervik said.

Breivik shook his head as the prosecution made its case, which included a passage from the original 2012 verdict which said that even after serving for 21 years in prison the defendant would still be a very dangerous man.

His lawyer Oeystein Storrvik has said Breivik is intent on eventually securing his release.

Addressing the court, Breivik blamed his crimes on online radicalisation by a leaderless network of far-right extremists, which he said had motivated his attacks.

"I was brainwashed," Breivik said.

"The order was... to re-establish the Third Reich. And how to do that is up to each soldier," he said.

Breivik, who described himself as a parliamentary candidate, also said that he would continue his fight for white supremacy and Nazi dominance, albeit via peaceful means.

Breivik  is serving Norway's maximum sentence of 21 years, which can be extended indefinitely if he is deemed a continued threat to society.

The Telemark court in Skien, southwest of the capital Oslo, where Breivik is serving his sentence, is hearing the case this week after the Oslo state prosecutor's office last year rejected Breivik's application for early release.

"Our position is that it is necessary with (continued) confinement to protect society," the prosecutor in charge, Hulda Karlsdottir, told Reuters.

Proceedings will take place over a maximum of four days in a prison gymnasium converted into a makeshift courtroom, with a decision expected about a week later.

If his request for release is denied, Breivik, who has changed his legal name to Fjotolf Hansen, can apply for a new probation hearing in a year's time, Karlsdottir said.

Breivik lost a human rights case in 2017 when an appeals court overturned the decision of a lower court that his near-isolation in a three-room cell was inhumane.

The European Court of Human Rights rejected a subsequent appeal.