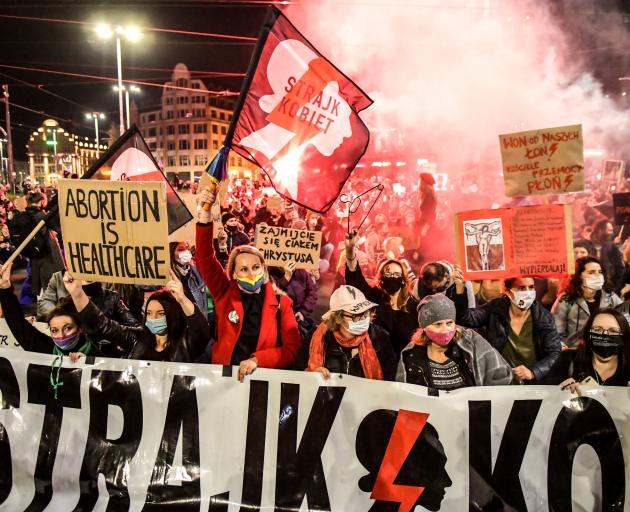 People came out to protest in Wroclaw against the ruling by Poland's Constitutional Tribunal that imposes a near-total ban on abortion. Photo: Agencja Gazeta via Reuters
Thousands have taken to the streets across Poland for the seventh day of protests against a court ruling that further limits the country's highly restrictive abortion laws.

Police on Wednesday warned demonstrators not to target churches again after some services were disrupted and buildings defaced in an earlier protest.

Tens of thousands of people in Poland have defied Covid-19 restrictions to protest against a new high court ruling that imposes a near-total ban on abortion. https://t.co/eP11ZEiL1F pic.twitter.com/I0DfUZhjbj

Poland has been rocked by huge demonstrations, most of them peaceful, since its top court ruled last Thursday that abortion due to foetal abnormalities was not permissible under the constitution.

The decision means only abortions due to incest, rape or a risk to the mother's health remain legal, setting predominantly Roman Catholic Poland far apart from the European mainstream.

Demonstrators have blamed the nationalist government of Prime Minister Mateusz Morawiecki and the Roman Catholic Church which has close ties to the ruling Law and Justice (PiS) party for the court verdict.

In a rare display of anger against the Church last Sunday, demonstrators in Warsaw, Poznan and Katowice disrupted church services and defaced church buildings.

"In light of plans being announced by organisers for further acts of aggression and profanation, the police will take decisive action. The goal of the police is to ensure public order and safety for all citizens," the Interior Ministry said in a statement.

It was not clear which group or plans the ministry was referring to. A mass demonstration is planned in Warsaw on Friday.

On Wednesday, organisers called for a nationwide walk-out for women at work. Some employers, including schools, announced a day off to allow people to join the protests.

In the evening, chanting "hypocrites, fanatics", thousands marched through central Warsaw, some carrying posters that read "Revolution is a woman" or "I'd rather stay home but I have a government to overthrow", and singing the national anthem. 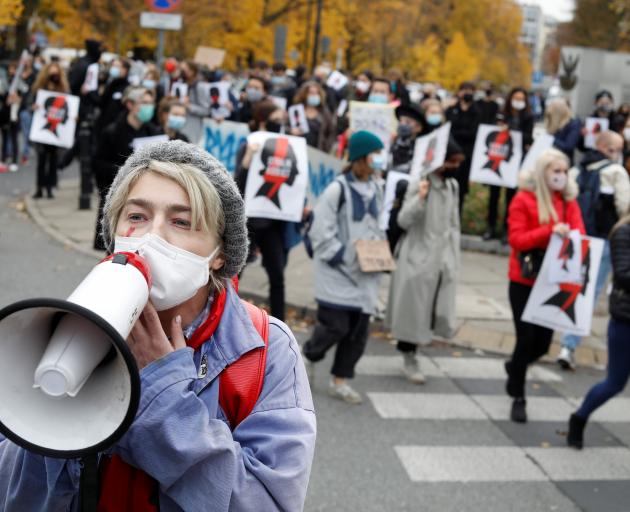 Poland has been rocked by huge demonstrations, most of them peaceful, since its top court ruled that abortion due to foetal abnormalities was not permissible under the constitution. Photo: Agencja Gazeta via Reuters
'VISION OF A MADMAN'

Similar protests were staged across Poland. In Jelenia Gora, a town of 84,000 in the southwest, hundreds of mostly young people met in front of a shopping mall, some blowing plastic trumpets or holding banners that said "My uterus hurts looking at you" or "This is my country, not a vision of a madman."

Most wore masks in line with coronavirus restrictions in Poland that require them to be worn in public. Poland registered a record for new infections on Wednesday above 18,000.

Kamila Kobrynska (35), who runs a professional training school for adults in Warsaw, joined businesses across Poland in closing up shop on Wednesday.

"We won't go bankrupt in one day. This issue is so important, there is no discussion whether we work or protest."

The government denies influencing the court but the ruling follows five years of PiS efforts to instil more conservative values in public life in close cooperation with the Catholic Church.

An opinion poll by Kantar for the liberal Gazeta Wyborcza daily showed public support for PiS dropping to 26% this week from 39% last month, and another poll showed more than 70% of Poles say they oppose the court's ruling.

In a sign the ruling conservatives may want to soften the ruling, President Andrzej Duda, a party ally, told private broadcaster Polsat News he saw the need for a legislative amendment that would allow for a termination if the foetus could die during labour or shortly after.

Supporters of the government were eager for the decision to be implemented. An anti-abortion campaign group, Ordo Iuris, called for its inclusion in the official gazette so that it goes into effect.

"We believe that every day of delay is a day that we lose another child's life because of suspected flaws or genetic diseases," said director Karolina Pawlowska.