Airplanes are parked on the tarmac as air traffic is affected by the spread of the coronavirus disease in Frankfurt, Germany. Photo: Reuters
The world's richest nations have poured unprecedented aid into the global economy as coronavirus cases ballooned in the new epicentre Europe, with the number of deaths in Italy outstripping those in mainland China, where the virus originated. 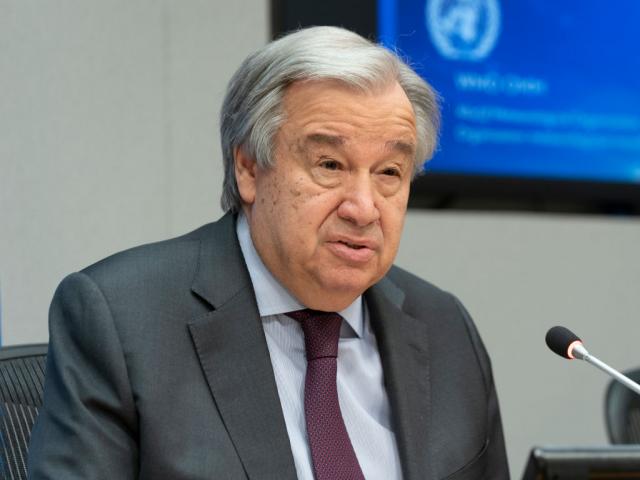 UN Secretary-General Antonio Guterres. Photo: Getty Images
With over 242,000 infections and nearly 10,000 deaths, the epidemic has stunned the world and drawn comparisons with painful periods such as World War 2, the 2008 financial crisis and the 1918 Spanish flu.

UN chief Antonio Guterres warned that a global recession, "perhaps of record dimensions", was a near certainty.

"This is a moment that demands coordinated, decisive, and innovative policy action from the world's leading economies," Guterres told reporters via a video conference. "We are in an unprecedented situation and the normal rules no longer apply."

Tourism and airlines have been particularly battered, as the world's citizens hunker down to minimise contact and curb the spread of the highly contagious COVID-19 respiratory illness. But few sectors have been spared by a crisis threatening a lengthy global recession.

The United States is urging Americans not to travel abroad at all and could announce restrictions at the US-Mexican border on Friday. They would be similar to the closure of the US-Canada border to non-essential traffic.

Markets have suffered routs unseen since the 2008 financial debacle, with investors rushing to the US dollar as a safe haven. Wall Street tried to bounce back on Thursday. The benchmark S&P 500 closed up 0.5%, still around 30% off highs reached last month. US oil prices posted their largest one-day gain ever, rising 25%.

The virus, thought to have originated from wildlife in mainland China late last year, has jumped to 172 other nations and territories with more than 20,000 new cases reported in the past 24 hours - a new daily record.

Cases in Germany, Iran and Spain rose to more than 12,000 each. An official in Tehran tweeted that the coronavirus was killing one person every 10 minutes.

Britain, which has reported 144 deaths, was closing dozens of underground stations in London and ordering schools shut from Friday.

Some 20,000 soldiers were on standby, the Queen headed for sanctuary in the ancient castle of Windsor, and the Tower of London was to close along with other historic buildings.

"Many of us will need to find new ways of staying in touch with each other and making sure that loved ones are safe," the 93-year-old monarch said in an address to the nation.

"I am certain we are up to that challenge."

Italian soldiers transported corpses overnight from an overwhelmed cemetery in Europe's worst-hit nation where 3,405 people have died, more than in mainland China. Germany's military was also preparing to help.

Supermarkets in many countries were besieged with shoppers stocking up on food staples and hygiene products. Some rationed sales and fixed special hours for the elderly, who are particularly vulnerable to severe illness.

Solidarity projects were springing up in some of the world's poorest corners. In Kenya's Kibera slum, volunteers with plastic drums of water and boxes of soap on motorbikes set up handwashing stations for people without clean water.

Amid the gloom, China provided a ray of hope as it reported zero new local transmissions of the virus, a sign of success for its draconian containment policies since January. Imported cases accounted for all 34 new infections in China.

In the United States, where President Donald Trump had initially played down the coronavirus threat, infections surged with over 11,500 known cases and at least 186 deaths.

Trump has infuriated Beijing's Communist Party rulers by rebuking it for not acting faster and drawn accusations of racism by referring to COVID-19 as the "Chinese virus".

“We continue our relentless effort to defeat the Chinese virus," he said in opening remarks at a briefing on Thursday.

The head of the US National Guard said tens of thousands of its troops could be activated to help US states deal with the outbreak now in all 50 states.

In a bewildering raft of financial measures around the world, the European Central Bank launched new bond purchases worth €750 billion ($NZ1.41 trillion). That brought some relief to bond markets and also halted European shares' slide.

The US Federal Reserve rolled out its third emergency credit programme in two days, aimed at keeping the $US3.8 trillion ($NZ6.7 trillion) money market mutual fund industry functioning. The Bank of England cut interest rates to 0.1%, its second emergency rate cut in just over a week.

The desperate state of industry was writ large in Detroit, where the big three automakers - Ford Motor Co, General Motors Co and Fiat Chrysler Automobiles NV - were shutting US plants, as well as factories in Canada and Mexico. Some automakers have pledged to help manufacture much needed medical supplies.

With some economists fearing prolonged pain akin to the 1930s Great Depression and others anticipating a bounceback, gloomy data and forecasts abounded.

In one of the most dire calls, J.P. Morgan economists forecast the Chinese economy to drop more than 40% this quarter and the US economy to shrink 14% in the next. Ratings agency Moody's prepared for mass downgradings.

In Britain, small gin distilleries have started producing hand sanitser amid a national shortage, a trend mirrored across the globe from New Zealand and Australia to the United States.

And Monaco cancelled its showcase Formula One Grand Prix, the most famous and glamorous race on the calendar, in another high-profile sporting casualty of the epidemic.