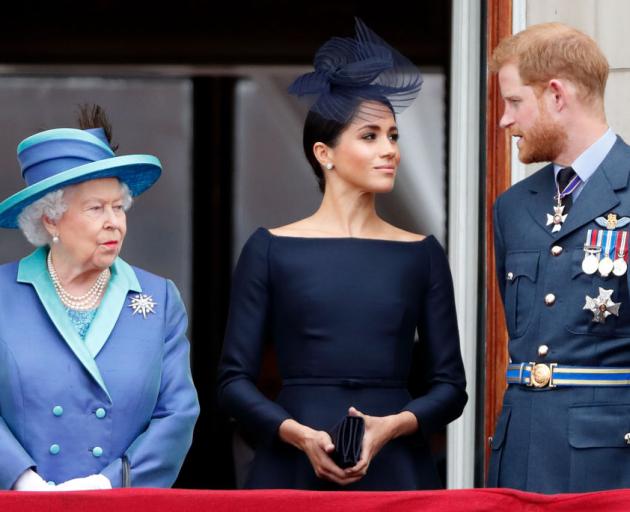 Queen Elizabeth II, Meghan, Duchess of Sussex and Prince Harry, Duke of Sussex watch a flypast to mark the centenary of the Royal Air Force from the balcony of Buckingham Palace in 2018. Photo: Getty Images
Officials from the royal family will be trying to work out the practicalities of the Duke and Duchess of Sussex stepping back from their senior duties after The Queen agreed to a period of transition.

The press spokesperson for the Queen from 1988 to 2000, Dickie Arbiter, told RNZ's Summer Report the move by the Duke and Duchess of Sussex - and the Queens' support of it - is unprecedented.

After Harry and Meghan released a statement announcing they will step back as senior royals, The Queen has agreed to a "period of transition" in which Harry and Meghan will spend time in Canada and the UK.

Following talks at Sandringham, The Queen said she was "entirely supportive" of their desire for a new role but "would have preferred" them to remain full-time working royals.

"These are complex matters for my family to resolve, and there is some more work to be done, but I have asked for final decisions to be reached in the coming days," she said.

Officials from each family member's office will now be sitting down to work out the nuts and bolts of how Harry and Meghan will be able to forge a life for themselves and earn their own keep while fulfilling their duties to The Queen, Arbiter said.

"You've got to remember, Harry and Meghan were created president and vice president, ambassadors of the Commonwealth's youth trust - a very important job."

It's just one of the couple's many duties. Harry is the face of Invictus Games, which begin in May.

How the couple will continue to support their charity work will be on the list of things for officials to work through, Arbiter said.

As part of the shift towards becoming financially independent the couple have launched the brand Sussex Royal.

"The only problem is, somebody else on the European continent, within the EU, has also lodged the same name so Harry and Meghan are going to be challenging that as having lodged it first and laid first claim."

After they sort that out the couple will launch a foundation and Arbiter imagines they'll produce commercial goods like branded clothing.

The money is used to fund the restoration of The Queen's works of art.

"Going commercial and producing a royal brand of goods is nothing new, it's just that Harry and Meghan, they don't have the wherewithal, they need a good support team ... that's not going to rip them off."