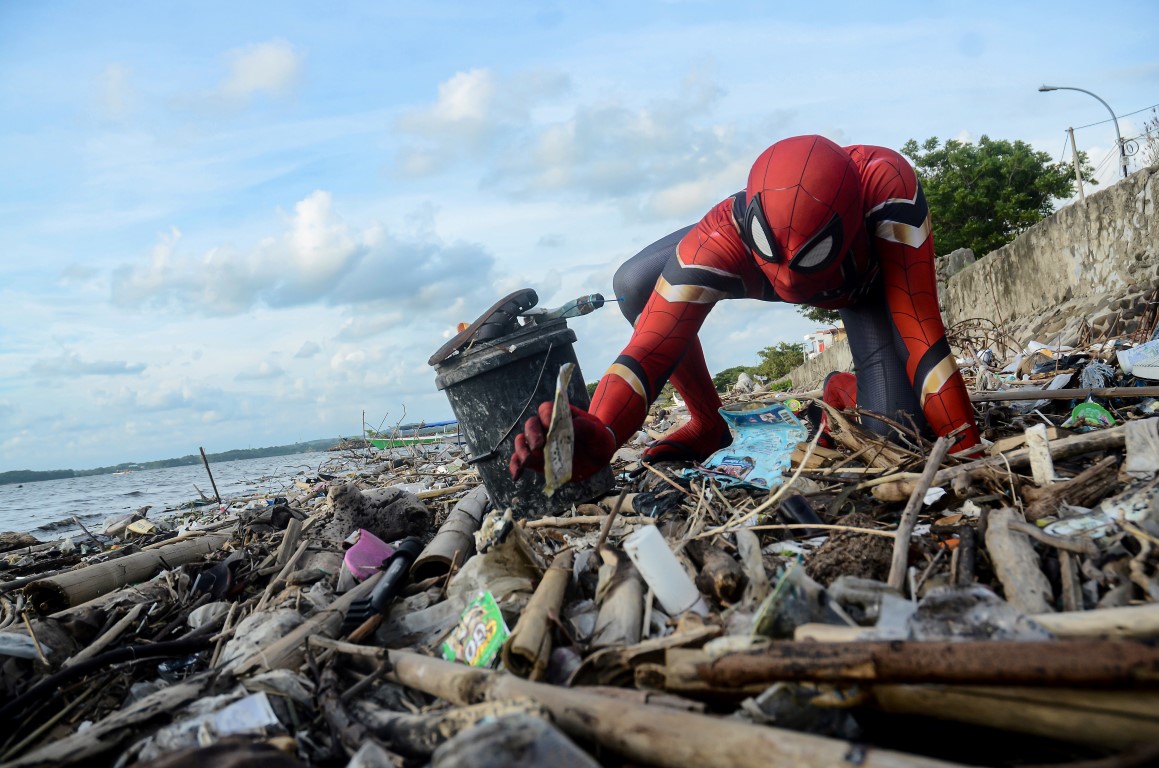 Dressed as Spider-Man, Rudi Hartono collects rubbish at a beach in Parepare, South Sulawesi province, Indonesia. Photo: Reuters
Indonesian cafe worker Rudi Hartono struggled to persuade residents of his small coastal community of Parepare to follow his example and pick up rubbish strewn on the streets and beaches -- until he dressed up as Spider-Man.

"At first, I did the same activity without wearing this costume and it did not attract the public's attention in order for them to join and help pick up trash," said the 36-year-old Hartono, wearing his red and blue Spider-Man costume.

"After wearing this costume, it turns out the public's response was extraordinary," he added.

Many parts of Indonesia suffer from having little in the way of organised public services to deal with trash, and plastic waste in particular often ends up in rivers or in the oceans.

Indonesia, the world's fourth most populous country, generates 3.2 million tonnes a year of waste, with nearly half ending up in the sea, a 2015 study in the journal Science showed.

Hartono usually collects waste as Spider-Man before his cafe work begins at 7pm and his efforts have helped put a spotlight on the waste issue nationally. He has been interviewed by newspapers and appeared on television chat shows dressed in his Marvel Comics super hero costume to explain his motivation.

Initially, he admits, he bought the Spider-Man outfit simply to amuse his nephew, before others in his town took notice.

"We need a creative role model to foster society’s active engagement in protecting the environment," said Saiful Bahri, a resident of Parepare in southwest Sulawesi.

With a population of around 142,000, Parepare produces around 2.7 tonnes of unmanaged waste per day, according to data released in 2018 by the ministry of environment and forestry.

Indonesia, an archipelago of more than 17,000 islands, is estimated to be the world’s second-largest producer of plastic pollutants in the oceans after China, the study added.

Hartono said he hoped the government would throw more weight behind efforts to clean up trash and tighten rules on waste management including on single-use plastic bags.

"Minimising plastic waste is the most important thing to do, because plastic is difficult to decompose," he said.