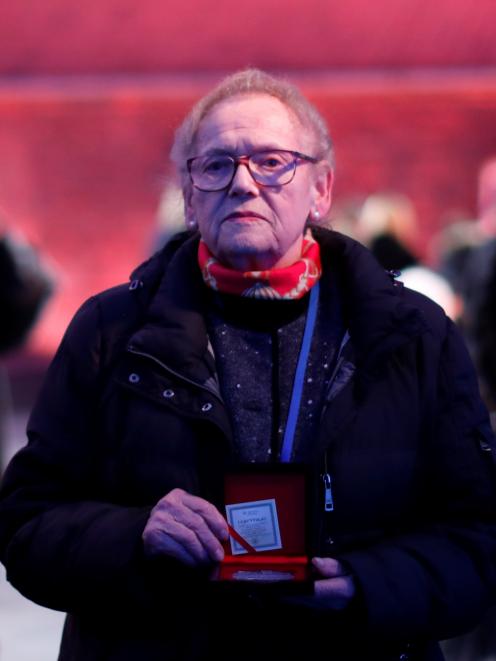 Edith Notowicz says she returned to the death camp because "I want to light a candle for those who did not come back. I owe this to them". Photo: Reuters
Edith Notowicz first saw Nazi SS doctor Josef Mengele when she arrived at the Auschwitz extermination camp in May 1944, after several days crammed into a cattle train so packed that by journey's end she and her family had to sit on the dead.

"He was in his military uniform, carrying a conductor's baton and waving it in the air, whistling, as he was sorting us out - left, right, left, right - deciding who would live and who would die," said Notowicz, aged 15 at the time and now 90.

Mengele, the "Angel of Death", picked Notowicz to be part of the medical experiments he was conducting on children, especially twins, pregnant women and other inmates. In Notowicz's case, she was sterilised by force.

"There were four or five people around me, Mengele as well. They cut me up, without anaesthetic," she said, drawing an imaginary line on her pelvis. "I screamed and they hit me."

She lost her parents and siblings in the chaos of their arrival at Auschwitz. She never saw them again.

Now Notowicz, one of very few former inmates still alive, has returned to Auschwitz for the third, and as she says "probably the final time", to honour the 75th anniversary of the liberation of the camp by Soviet soldiers.

"I want to return there as a free person," she said. "I want to light a candle for those who did not come back. I owe this to them. They were unknown to me but they were human beings."

Other survivors have made the journey too: Jona Laks travelled with her granddaughter from her home in Israel.

"I saw hell and I began to cry," Notowicz said of her visit.

To help her through it, Notowicz recalls happy images from her childhood growing up in rural Hungary with a mother who loved playing the piano, riding horses, swimming in the lake and eating dinner at the weekend with her father. He was away working at his sawmill the rest of the week.

Notowicz did not go back to Auschwitz for most of her adult life. After the war, she returned to Hungary, but managed to leave the then-communist country in the late 1950s.

She moved to Israel, worked in a travel agency in Tel Aviv, and travelled the world whenever she had the time and money. It was in Israel that she met her husband, Naftali Notowicz, who was visiting a cousin.

How do you live a life with the legacy of Auschwitz?

"You work really hard at it. You don't look back and I only looked forward," she said in her Trondheim flat, decorated with photos of her friends' grandchildren, to whom she is a bonus grandmother.

But a decade ago, Notowicz felt the need to return to try to close a chapter of her life. "I remember that first time back, I was so angry. 'Why did they do this? How could they do this?' I wanted justice. But you can't have justice," she said.

"I was bitter but I never hated. Because hate is worse for you. To hate will kill you inside. The second time, I had left that bitterness behind.

"This time, I want to finish it. I will never come back to this place."