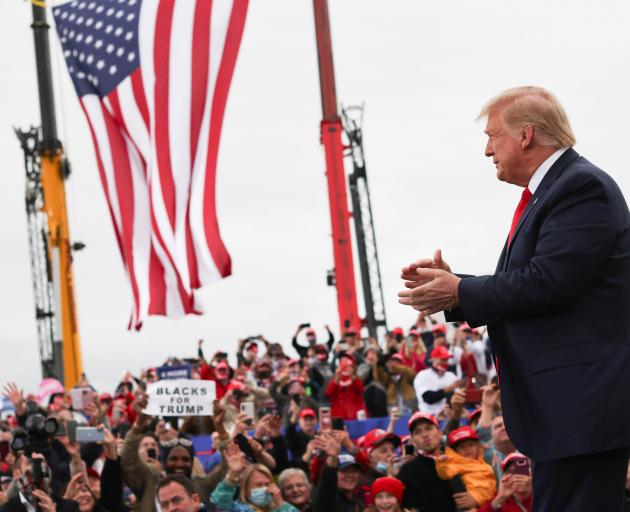 President Donald Trump acknowledges the crowd at MBS International Airport in Freeland, Michigan. Photo: Reuters
US President Donald Trump has predicted at a rally in Michigan that he would win the election battleground state as thousands of cheering, largely maskless supporters defied state guidelines aimed at containing the novel coronavirus.

"This is not the crowd of a guy who comes in second place," Trump told men, women and children - many wearing red "Make America Great Again" T-shirts and hats - as he stood in front of the presidential aircraft Air Force One at an airport near Midland, Michigan.

Trump campaign officials say that in the run-up to the November 3 election, they are planning to spend "massive amounts" of time in Michigan, an industrial state that along with Wisconsin and Pennsylvania, helped propel Trump to victory in 2016.

Trump campaign deputy national press secretary Samantha Zager said Trump was tapping into "organic enthusiasm from those who are disillusioned with career politicians like Joe Biden," and would attract new voters to "expand an already broad coalition of support."

Biden visited Michigan on Wednesday, hammering Trump over his taped comments to Washington Post writer Bob Woodward in which he said he was purposely downplaying the threat of the virus to avoid public panic.

Biden also unveiled an "offshoring tax penalty" on profits from products made overseas and sold in the United States, taking a page out of Trump's trade playbook.

The two politicians have widely divergent views on nearly everything, but both agree on the need to bring back manufacturing supply chains to the United States from China, and Biden is likely to keep many of Trump's tariffs in place initially if he were elected.

Whitmer's office had no immediate comment on the size of the crowd, which appeared to violate state rules against gatherings of more than 50 people.

Greg Fernandez (63), who works in real estate, said he was not wearing a mask at the rally because he had "already had" the virus, "so I'm good."

Fernandez said he expected Trump to win Michigan handily, adding: "No more globalists, no more new world order. We need a businessman to run our country, and he's done a great job."

Meanwhile, half of Americans believe media reports that Trump referred to US soldiers as "suckers" and "losers," despite his denials, but the alleged comments do not appear to have hurt his standing among Republicans, a Reuters/Ipsos poll shows.

The national public opinion poll, released Thursday, found that 50% of US adults said they found the reports to be credible, while 37% said they did not and 13% said they were not sure.

Yet most Republicans still hold favourable views of Trump, and a majority of Republicans say the recent news has not influenced their choice for president.

Trump has denounced multiple news reports that he repeatedly disparaged American servicemen, including a report in The Atlantic magazine that he had once called dead US marines "suckers" for getting killed, and that a cemetery of fallen American servicemen in Europe was filled with "losers."

The poll shows that while public disapproval of Trump has increased slightly over the past week, it is mostly unchanged among Republicans.

Republicans have unflinchingly backed Trump since before he won the White House, with little variation in their approval of him during events including his impeachment in the US House of Representatives.

The poll, conducted on Tuesday and Wednesday, showed 58% of Republicans or Republican-leaning independents said Trump's alleged comments have had no impact on their decision to vote for him. Another 18% said they were now more likely to vote for Trump and 14% said they were less so. The remaining 10% said they are not sure.