Sweden will apply for NATO membership this week, Prime Minister Magdalena Andersson says, but its accession process, and that of Finland, hit a snag when Turkey's president said he would not approve the bids.

Russia's invasion of Ukraine from late February has shaken up Europe's security architecture and forced Sweden and Finland to choose sides after staying out of the United States-led NATO alliance during the Cold War.

Moscow calls its invasion of Ukraine a "special military operation" to rid the country of fascists, an assertion Kyiv and its allies say is a baseless pretext for an unprovoked war. 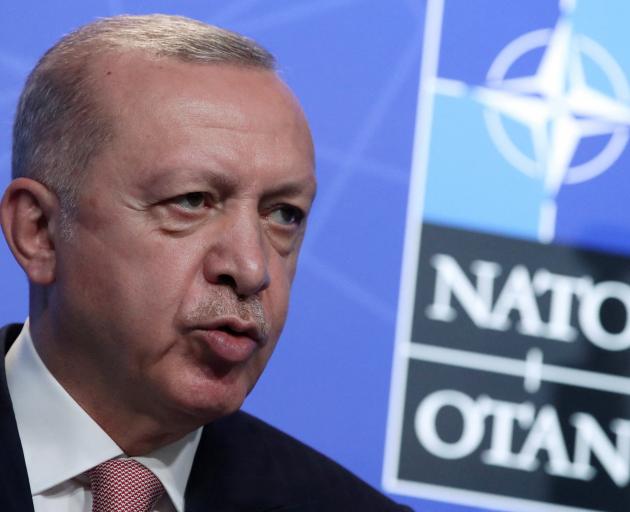 The Scandinavian nations need each of the North Atlantic Treaty Organisation's 30 members to approve their applications. The ratification process had been expected to take up to a year, though Turkey's objections have thrown that into doubt.

At a news conference, Turkish President Tayyip Erdogan said on Monday that Sweden and Finland should not bother sending delegations to Ankara to persuade Turkey to support for their bids.

"Neither of these countries have a clear, open attitude towards terrorist organisations," Erdogan said. "How can we trust them?"

He called Sweden a "hatchery" for terrorist organisations with terrorists in parliament.

Sweden's Social Democrat government, worried the country will be vulnerable while its application is considered, had been hoping for a quick ratification process.

But Turkey's objections, which NATO leaders initially hoped would not cause a major delay, now look to present a serious obstacle.

The decisions by Finland and Sweden to apply to NATO set the two countries on a path toward ending policies of military non-alignment that had defined their defence strategies since the start of the Cold War.

"We are leaving one era behind us and entering a new one," Andersson told a news conference on Monday.

She said Sweden's application could be submitted in the next couple of days and would be synchronised with Finland.

The decision to abandon the military non-alignment that has been a central tenet of Swedish national identity for two centuries reflects a sea change in public perception in the Nordic region following Russia's attack on Ukraine.

Andersson said Sweden did not want permanent NATO military bases or nuclear weapons on its territory if its membership was approved.

General Micael Byden, commander of the Swedish Armed Forces, told a news conference the decision to apply was right from a military strategic perspective and that defending Sweden, unilaterally or in cooperation with other states, would be easier with Sweden part of NATO.

"I know, based on my conversations and the relations that I have with my counterparts, that Sweden is welcome in NATO. But we are not only welcome - I also know that Sweden as a member makes NATO stronger," Byden said.

Meanwhile, Russian President Vladimir Putin appeared on Monday to climb down from threats to retaliate against Sweden and Finland.

"As far as expansion goes, including new members Finland and Sweden, Russia has no problems with these states - none. And so in this sense there is no immediate threat to Russia from an expansion to include these countries," Putin said.

The comments appeared to mark a major shift in rhetoric, after years of casting NATO enlargement as a direct threat to Russia's security, including citing it as a justification for the invasion of Ukraine itself.

Soon before Putin spoke, Russia's deputy foreign minister, Sergei Ryabkov, said Finland and Sweden were making a mistake that would have far-reaching consequences: "They should have no illusions that we will simply put up with it."

Putin said NATO enlargement was being used by the United States in an "aggressive" way to aggravate an already difficult global security situation, and that Russia would respond if the alliance moves weapons or troops forward.

"The expansion of military infrastructure into this territory would certainly provoke our response. What that (response) will be - we will see what threats are created for us."