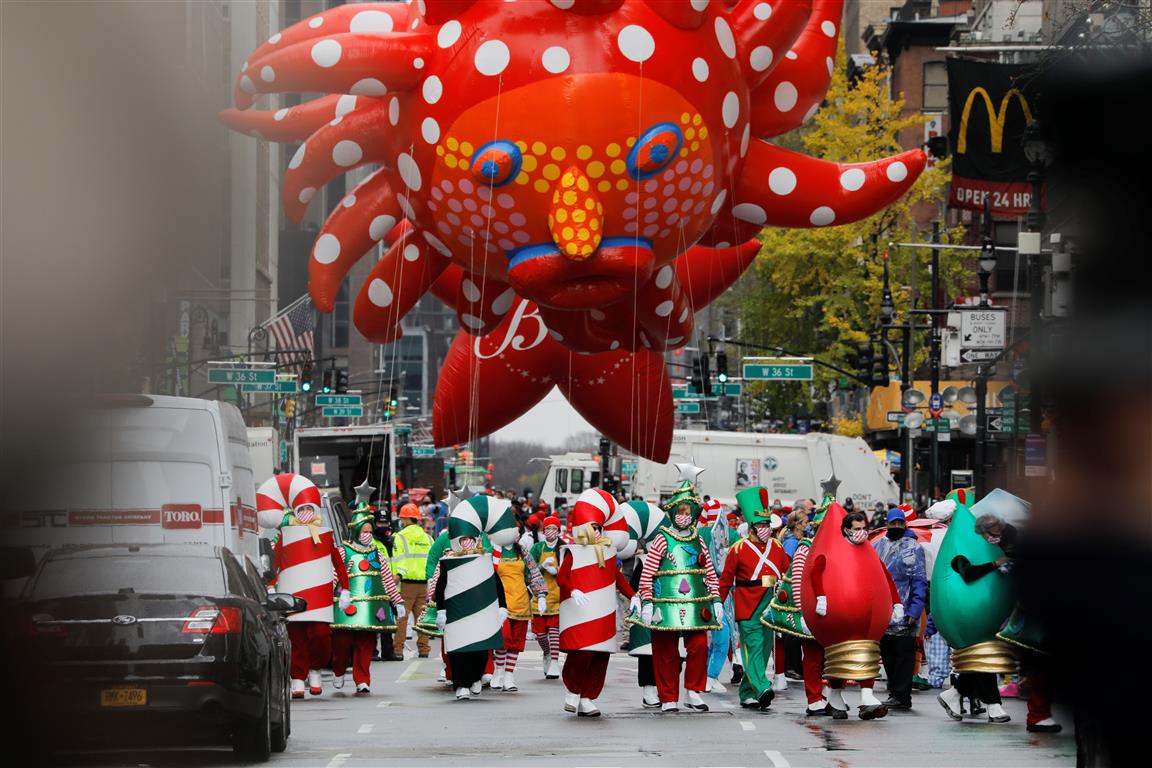 Assistants carry Yayoi Kusama's "Love Flies Up to the Sky" balloon during the 94th Macy's Thanksgiving Day Parade in Manhattan, New York City. Photo: Reuters
Americans have celebrated a Thanksgiving Day transformed by the coronavirus pandemic, with the Macy's parade limited to a television-only event and many families resigned to connecting on video or mourning the loss of a loved one to the disease.

Thanksgiving, normally a day for family and friends to gather in big numbers to feast on turkey and pumpkin pie and remember life's blessings, has been upended by the pandemic, with cases and deaths surging in recent weeks as cooler weather pushes people indoors where the virus spreads more easily.

The Macy's Thanksgiving Day Parade in New York, a spectacle of giant character balloons that has delighted children for nearly a century, was scaled back significantly. The route was reduced to one block, rather than 2.5 miles; balloon handlers were replaced by specially rigged vehicles; and spectators were prohibited from lining the streets as before.

The event concluded at noon after a three-hours of performances, floats and balloons, featuring music stars such as Dolly Parton and a four-story-tall Snoopy in astronaut gear - all without the usual millions crowding the streets to watch.

Metal barricades keeping spectators at a distance did not deter people like Brian Campbell, a 55-year old native of Rockaway, New Jersey, who described his fifth year of coming to the parade as "disappointing," or Moriah Hargrave of Lafayette, Louisiana, who got as close as she could to the action near Macy's flagship store in midtown Manhattan with the hopes of stealing a glimpse of Parton.

"We came to just knock out a few things on our bucket list for New York City," said Hargrave, 36. "It's a little sad to be this far away. But it's fun to be here."

The holiday is being celebrated at a time of severe economic strain for millions of Americans. More than 20 million people are receiving some form of unemployment benefits, and a fresh wave of layoffs is expected as governors impose business restrictions in a bid to tamp down spiraling infections, and with additional aid from Congress nowhere in sight.

Asia Foreman, who recently founded a nonprofit with her sister to raise awareness about mental health issues, was working on Thursday afternoon to finish delivering 500 plates of chicken, macaroni and cheese, yams and greens in Washington, D.C.

"We wanted to feed as many people as possible so turkey wasn't in the budget," she said, adding that many in her community were struggling to make ends meet. "A lot of people haven't been able to find new jobs to provide for their families because of COVID. It's not their fault."

US hospitalizations for Covid-19 reached a record of more than 89,000 on Wednesday, and experts warn that Thanksgiving could lead to a spike in cases and significantly boost a death toll that has exceeded 262,000 nationwide.

Despite advice from the Centers for Disease Control to stay home for the holiday, nearly 6 million Americans travelled by air from Friday to Wednesday, according to the US Transportation Security Administration, although that is less than half the figure during the same period last year.

Many Americans have not seen their loved ones for months and see the annual get-together as important enough to outweigh the possible risks. Nearly 40% plan to attend a "risky gathering" during the holiday season, either in excess of 10 people or with people from outside their household, and a third will not require masks of their guests, according to a national survey by Ohio State University Wexner Medical Center.

Many others have cancelled travel plans and will instead connect with loved ones over FaceTime or Zoom.

Margaret Bullard, a public defender in Atlanta, said she and her husband have taken every precaution since the onset of the pandemic, which came soon after the birth of her 9-month-old son. They drove from their home in Marietta, Georgia, to North Carolina to spend Thanksgiving with her in-laws, who have been equally fastidious in limiting potential exposure to Covid-19.

"As much as we would like to see some other family members, we know that we would be taking a much bigger risk by doing so," said Bullard, who is co-administrator of a Facebook group for "Covid-conscious" Georgians. "There will be plenty of opportunities for get-togethers in the future if we all do what we can to stay safe."