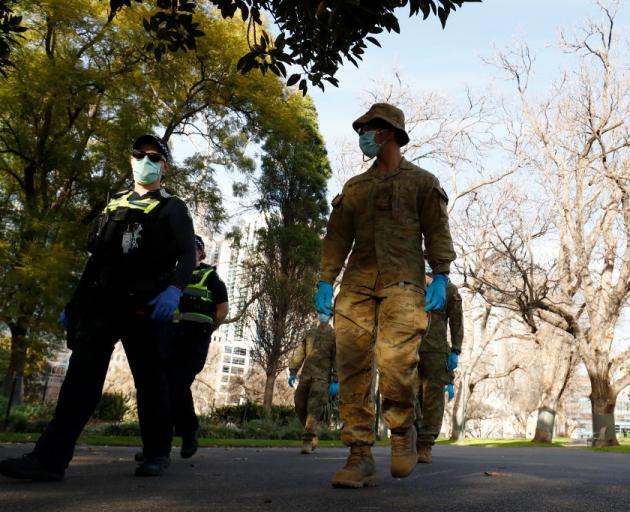 Members of the Australian Defence Force patrol Melbourne streets on Monday. Photo: Getty Images
Victorians could be stopped in the street by police and asked to produce a work permit to aid enforcement of tightened Covid-19 restrictions.

While announcing new rules for businesses to fight the state's second wave of the virus, Premier Daniel Andrews flagged a permit system could be rolled out for essential workers.

"We'll have more announcements to make this week about a permit system where people will have a piece of paper that says 'this is where I work, this is what I do'," Mr Andrews told reporters in Melbourne on Monday.

"For the purposes of enforcement, curfew, all of those things, we don't want to be putting people into that really challenging situation where they have to explain themselves.

"That's going to be a simple, common-sense process."

Roughly 250,000 more Victorians will be put out of work as part of the state's three-tiered system for workplaces which come into effect from Thursday.

But most Melbourne retailers will be closed to customers, while tight restrictions will slow construction and manufacturing output.

Cedar Meats, the source of Victoria's biggest cluster of the first wave with 111 cases, welcomed the extra safety measures which will see meat processors across the state scale back production to two-thirds.

The Brooklyn-based meatworks has also been given the all-clear to re-open on Tuesday after a testing blitz confirmed an infected staff member hadn't transferred the virus to other workers.

Schools, meanwhile, are closed on Tuesday for a pupil free day as students recalibrate to remote learning from Wednesday.

It comes as the state recorded 429 new cases of coronavirus on Monday and 13 deaths, taking the state toll to 136 and the national figure to 221.

It equals last Thursday as the state's worst day for fatalities.

The latest grim figures came as the state began a six-week lockdown from Sunday. It is expected to run until at least September 13.

Under the new restrictions, residents of metropolitan Melbourne must follow an 8pm-5am curfew and can't travel more than 5km from home for shopping or exercise.

Regional Victoria is moving to stage three restrictions, with restaurants, cafes, bars and gyms to shut from midnight on Wednesday.

Payments for Victorians who need to self-isolate for 14 days and have no sick leave will be made available by the federal government.

Prime Minister Scott Morrison said people can apply for the $A1500 ($NZ1605) payment multiple times, and it's primarily aimed at people on short-term visas.

Gladys Berejiklian has pledged that New South Wales will get tougher with its border restrictions if needed, after a baby coming from Victoria was among the neighbouring state's newest cases.

NSW reported 13 new COVID-19 cases on Monday - four of which were returned travellers from overseas or Victoria, and one with no known source.

Another four cases were announced from the weekend - a 52-year-old woman, her son, daughter-in-law and their baby.

The family had recently returned from Melbourne to Wagga Wagga in the Riverina region and went into self-isolation as required.

Criteria for travel between NSW and Victoria was tightened two weeks ago, but with Victoria continuing to record hundreds of new cases each day, the NSW premier hasn't ruled out further restrictions.

"If we have to do more, we will," the NSW premier told reporters on Monday.

The premier herself revealed she now carries a mask at all times, as she urged public-facing workers, worshippers, people living near community clusters and those in enclosed spaces to don face coverings.